Spartans at the double in Edinburgh Derby win 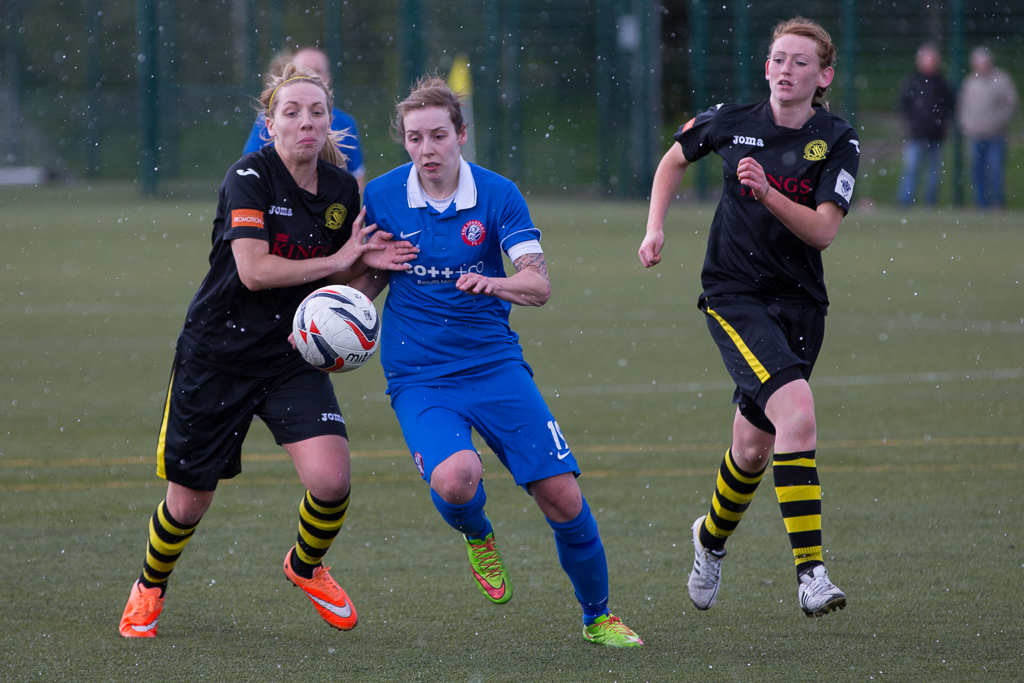 Teenager Ronaigh Douglas broke her SWPL goal scoring duck as she rounded off an impressive Spartans display in a 0-10 victory against Hutchison Vale at Saughton Enclosure.

Spartans Manager Debbi McCulloch was determined not to have a repeat of last season’s outcome at the same venue against her fellow Edinburgh opponents and later praised her side for a “pleasing performance from every player who controlled the game and scored some quality goals.”

There was a place on the bench for new recruit Morgan Mitchell following her midweek arrival from America whilst Michelle Russell earned a starting berth after a strong showing as sub last week against Hibs.

It was almost a perfect start for the home side within the opening 5 minutes when Ashley Carse rattled her effort off Rachel Harrison’s crossbar before the ball was hoofed to safety.

The game had all the hallmarks of an Edinburgh Derby including robust challenges, one by Kaney saw Danni Pagliarulo require lengthy treatment in the centre circle.

It took Spartans a quarter of an hour to take the lead.  Louise Mason delivered a corner kick into the six yard box where Ciara Barnes was on hand to swing her boot to it and directed it into the back of the net.

On the half-hour mark, Pagliarulo had failed to shake off her earlier knock and was replaced by Kirsty McLaughlin.

Four minutes later, Spartans doubled their lead.  Louise Mason rampaged towards the Vale danger zone before unleashing an unstoppable drive from the edge of the box that could only have one outcome.

With half-time moments away, Sarah Ewens gathered the ball, looked up and from almost 30 yards the prolific striker sent the ball flying into the postage stamp corner leaving Laura Connolly in the Vale goals helpless.

The home side started as they did in the opening half with Rebecca Galbraith counting herself unlucky not to gain an early way back into the game, with Rachel Harrison forcing the ball wide.

Three goals in a six minute spell delivered a triple-whammy for Andy Enwood’s side as Spartans doubled their first half advantage.

Louise Mason matched her first strike with another goal of outstanding individual skill then Alana Marshall out-foxed the Vale defensive wall from outside the box, sending her low drilled free-kick into the net.  The frantic spell ended when Bobbie Beveridge had her feet taken away from her inside the 18 yard box and up stepped Sarah Ewens to send the spot-kick home.

“She doesn’t score many tap-ins, does she?” noted one onlooker as Michelle Russell once again pulled a proverbial rabbit out the hat with a 35 yard strike which was made to look at the more spectacular as it crashed in via the underside of the crossbar.

Danica Dalziel made her first appearance in Spartans colours when she replaced Russell shortly after as McCulloch looked to utilise her squad who faced 3 games in a 7 day period.

Alana Marshall capitalised on a slip by a Vale defender outside the box before regaining her composure and finding the bottom corner of the net.

With 7 minutes left on the clock, the Spartans Manager offered a debut to Morgan Mitchell and it almost paid off instantly as the former Atlanta Silverbacks player had the ball in the net, only to be flagged for offside.

Kirsty McLaughlin did find her way to goal shortly afterwards with some fine footwork turning her marker inside-out to open up an opportunity and she didn’t need an invitation to hammer home.

As the man in the middle checked his watch, Ronaigh Douglas rounded off the rout when she found the roof of the net with an unstoppable effort, much to the delight of her team mates who ran in from across the pitch to celebrate the youngster maiden goal.

An ebullient  McCulloch said, “Last week was difficult as we’d put in a really good performance but lost out.  The response from the players at training this week has been really positive and this translated into today’s game.

“I thought we scored some clinical and well worked goals and with seven players getting on the score sheet it’s really positive and should boost our confidence ahead of Wednesday’s game against Glasgow City.”