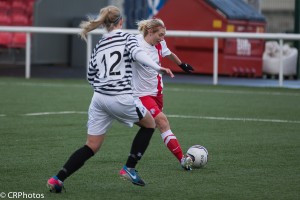 Spartans got their pre-season off to a winning start, defeating SWPL newcomers Queen’s Park 2-1 at Ainslie Park.

Manager Debbi McCulloch was happy with the win however it was the ‘getting back on the park’ that pleased her most. “With any pre-season game, the score isn’t really your main objective.  We’re looking to give players match time to get them sharp ahead of the start of the season.

“For myself and Mike (Ross, Head Coach), it’s also about trying to find the correct blend in terms of shape and who plays where.   Today’s game allowed us to mix it up a bit and try a few of the players in different positions which gave us food for thought ahead of next week’s game and beyond.”

Alana Marshall came close to getting the game off to a scoring start within the opening few minutes.  Her in-swinging corner clipped the junction of crossbar and post with everyone, including the Queen’s keeper, looking on.

The visitors had any early opportunity of their own with Mazzoni racing in the box, only to find Lessells equal to the task, narrowing the angle, forcing the striker to shoot wide.

It was frantic end to end stuff as both sides looked to settle things down and get into the swing of playing football again after the close season.  Nicolson split the Spiders defence with a fine through ball however Grant smothered it at the feet of Ewens.

However, it was the Spiders who drew first blood in the 22nd minute when Mazzoni got her head to a cross and from 6 yards, she sent the ball into the newly purchased red and white nets. 0-1

Spartans finally made a breakthrough with the game heading towards half-time.  Kerry Montgomery’s effort crashed off the crossbar only to fall at the feet of Ewens for the simplest of tap-ins at the back post to send the sides in a the break all square.

It looked like a golden opportunity in the 51st minute for Sarah Ewens to double her tally and give Spartans the lead for the first time in the game.  After doing all the hard work in the box to set up the chance, the ball just wouldn’t sit up for her and the ball sailed over the bar.

The elusive goal however wasn’t far away.  Montgomery continued to torment the Spiders defence and her mazy run in the box allowed space to open for Donachie who grabbed the opportunity to mark her arrival at the Club with a well taken goal. 2-1

An extraordinary chain of events denied Marshall the chance to extend the lead.  Her shot from 18 yards appeared to hit the roof of the net before bouncing back down on the line then off to relative safety.  Both sets of players in the Queen’s Park box appeared to acknowledge the goal however the man in the middle barely flinched and play raged on.

The 70th minute saw the introduction of youngster Eartha Cummings.  The goalkeeper currently plies her trade in the Spartans Girls set up and has been invited to the Scotland Women’s U/16s training camp next weekend.

Neither side could add to their goal tally in the latter stages of a game that served its purpose well and allowed McCulloch the first chance to see her new signings in action.

“Natasha (McMahon) played exceptionally well at left-back and it was great to see Tracy (Donachie) scoring this afternoon.  Danni Pagliarulo and Ciara Barnes both showed how comfortable they are on the ball.

“Young Eartha was fantastic too.  One of our main objectives for this season was to try and introduce a few of the youth players into the Seniors set-up and with Rachel Harrison completing her road to recovery from injury, we felt it was a great opportunity to bring her into the squad and she certainly didn’t look out of place today.”