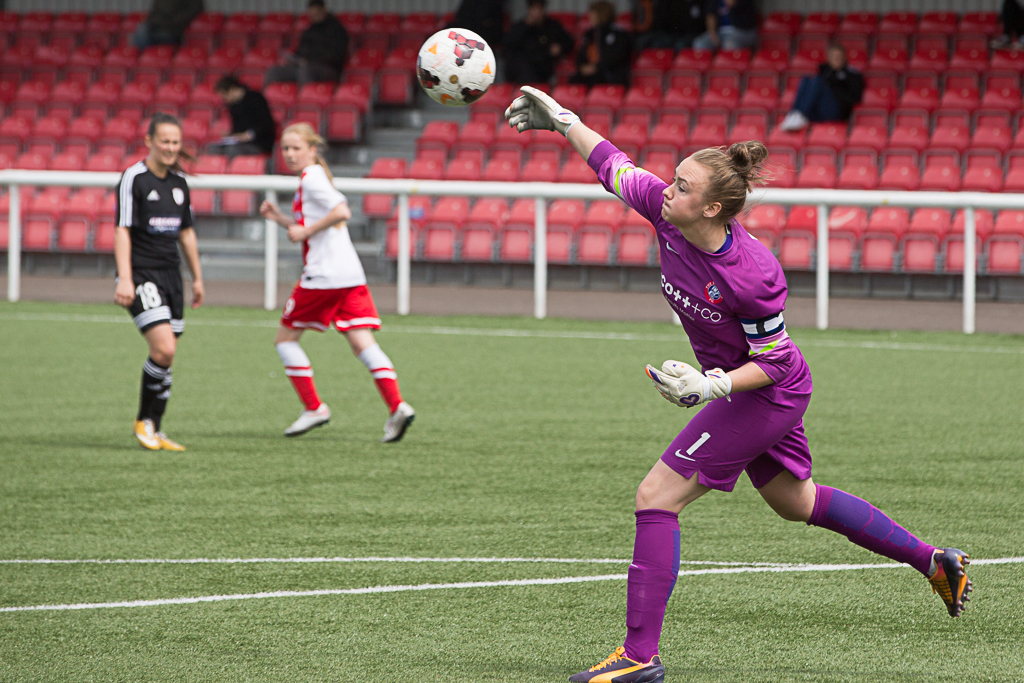 Spartans bowed out of the Scottish Cup against holders Glasgow City at Ainslie Park in a day that saw a cricket score, an SWPL scalp and a withdrawal in the 2nd Round of the national competition.

Katie Reilly handed the Captain’s armband to keeper Rachel Harrison after being forced to sit out the game due to injury.  Harrison was herself returning to the side following a spell on the sideline.

The game had barely found its rhythm when City took a 5th minute lead.  A free-kick was swept into the home box and despite its apparent lack of menace, a host of legs from each side failed to connect before the ball broke to Jo Love who squeezed the ball in between Harrison and her inside post, despite a valiant effort from the keeper.

Spartans had their first attempt at troubling Alexander at the other end when Michelle Russell pressed hard through the middle of the field before pulling the trigger.  Her long range effort had the Glasgow goalie sprawling and it took a second snatch at the ball to bring it under control.

As they had done in the opening half, City grabbed what was to be the decisive next goal of the game.  A defensive lapse allowed Clare Shine to race into the Spartans box and slot home.

On the hour mark, Danni Pagliarulo – who had taken a sore knock earlier in the game – was replaced by Morgan Mitchell, who graced the Ainslie Park surface for one final time.

It was a dogged and determined display from the Spartans back four against a City side looking to press and kill the game off.  The was a sharp intake of breath from the crowd as Ciara Barnes took one for the team, throwing her body directly in line with McMurchie’s  goal-bound effort.

There was a welcome return to the side for Clare Crosbie with 12 minutes left on the clock as she replaced Louise Mason and with five minutes to go, Eric Burns replaced the industrious Carla Jackson.

In the Scottish Cup ties between SWPL sides, 10-player Forfar defeated Hearts 3-2 whilst Hamilton were narrowly edged out 3-4 at home to Stirling in a humdinger.

Other SWPL sides in action including Hutchison Vale who fell 0-4 at home against Division 2 leaders Motherwell, Hibernian hit 7 without reply at home to Glasgow City’s SWFL side and Rangers hit 14 past a Forfar Development side.

The Rangers Development side were awarded a walkover after Inverness City were unable to raise a team to travel to Glasgow and finally, it was an unfortunate afternoon for SWFL 2nd Division side Dundee City who lost 29-0 on the road to Celtic at K Park.