Spartans defeated by Dons in day of frustration and flags 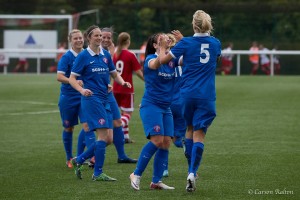 Spartans Manager Debbi McCulloch was left frustrated after Aberdeen performed a late smash and grab to win an at times fractious affair at Ainslie Park.

There was a place on the home bench for Under 17s star Ellie Simpson who joined fellow pathway players Ronaigh Douglas and Eartha Cumings in a side keen to continue their decent post-split performances against an Aberdeen outfit looking to stay in third place.

With just three minutes on the clock, it was the visitors who took the lead.  Rebecca Dempster collected the ball on the edge of the box before sending her dipping shot over the outstretched arm of Eartha Cumings in the Spartans goal.

The home side were offered an opportunity in the 14th minute after an errant pass-back by a Dons defender was deemed illegal inside the penalty box.  The red wall on the goal-line stood firm and denied Sarah Ewens from 10 yards out.

The Spartans striker looked to have added to her 14 goal tally for the season in the 19th minute after a mis-timed header back to the Aberdeen keeper following a long ball up-field was intercepted by Ewens who beat Rebecca Flaherty to slide it into the unguarded net.

As the player was met with her team mates to celebrate the equaliser, play was brought back for the far-side Assistant Referee’s decidedly delayed signal for offside.

On the half hour mark, Spartans were forced into making an earlier than planned substitution when Douglas was clattered in the centre circle and had to retire following treatment and replaced by Michelle Russell.

It was a slow start to the second half which only started to come to life on the hour when Russell tested Flaherty from long range however the keeper saved well.

At the other end, it was a fantastic save by a diving Cumings who denied Dempster from 12 yards, drawing applause from across the Ainslie Park crowd.

In the 67th minute, Claire Crosbie replaced Louise Mason, a substitution that was to pay dividends just four minutes later.  A stramash in the Aberdeen goalmouth saw the ball finally break to Claire Crosbie who headed the ball high into the net.

Carla Jackson was felled in the far corner and despite efforts to get the playmaker back in action, she was replaced by debutant Ellie Simpson.

As the game looked to be heading for a share of the spoils, a cross field pass looked to find Lauren Gordon in an offside position behind the Spartans defence however play raged on and despite Cumings getting a hand to the ball, it nestled into the bottom corner to give Aberdeen the unlikeliest of victories.