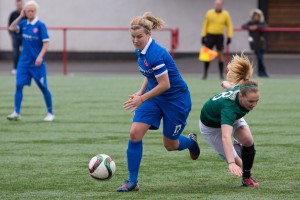 Spartans head to Albyn Park on Sunday in what promises to be another enthralling Edinburgh Derby against Hibernian.

The two teams locked horns in the SWPL Cup in April and it required a penalty shoot-out to separate the sides after a pulsating tie that finished 2-2 at the end of extra time.

This time round, Debbi McCulloch’s side look to bounce back from a disappointing defeat to Celtic at home last weekend, whilst our hosts will be desperate to push Wednesday’s Cup Final defeat to City to the back of their minds.

With just three league matches left before the summer recess and SWPL split, a strong Spartans voice in the crowd is key.  Kick off on Sunday is at 2pm and the team would love to see you there.

Our Reserves are on the road for a second week running in the SWFL, taking on Blackburn United.  A win would be the proverbial icing on the birthday cake for Coach Lynsey Cowan. Kick-off 1pm at New Murrayfield Park. With both Hearts Development and Claremont in action, three points is the only outcome on Cowan’s agenda.