Spartans face test from the west in midweek SWPL clash 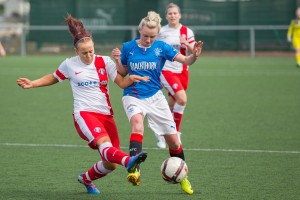 The floodlit midweek fixture arises as a result of the Scottish National team’s World Cup Play-Off two-legged semi final against Netherlands in October, allowing Anna Signeul’s side every opportunity to defeat the Dutch in order to set up a showdown against either Italy or Ukraine.

For McCulloch, the preparation for another tough Top 6 encounter remains as focused as ever. “Midweek games are always tricky due to players working etc but the players know how to prepare correctly so I don’t think it will have much of an impact.

“Obviously it’s beneficial to us that the game is being played at the Academy as travelling midweek is never easy. We had a good training session on Monday night and went over the specifics we need to apply on Wednesday night.”

Opponents Rangers head to Ainslie Park for the second time in a month, and they head east on the back of finding the net four times in their last two league outings.

It’s been close between two of the leagues finer footballing sides so far this season, with an early 0-0 stalemate in Glasgow followed by a 1-1 draw in the Capital last month. Spartans gained the upper hand in the other encounter, winning 0-1 on the road in the League Cup back in March.

McCulloch said, “The past three games against rangers have been tight but we are confident that if we play well and stick to our tactics that we can continue our good form against them as the three points are vital for us to progress higher up the table.

“We need to continue playing the way we have been in recent games and the mood in the camp is very positive currently although we know we will need to work hard against a talented Rangers side.”

On the player front, everyone has come through last weekend’s Scottish Cup win unscathed, including Lana Clelland who made a goal scoring return to action & Sarah Ewens who netted her 100th goal in Spartans colours.

The match kicks off at 7.45pm. Admission prices are £5, Concessions £1 and our Cafe Bar will be open throughout the game.