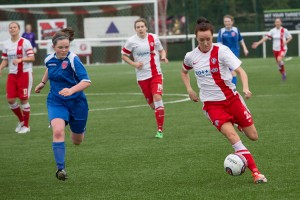 Spartans continue their journey in search of silverware when they travel to Station Park to take on Forfar Farmington in the 3rd Round of the Scottish Cup this Sunday in what Manager Debbi McCulloch describes as a ‘special competition’.

After a convincing win on the road at Aberdeen on league duty last week,  McCulloch’s side are on the road again to take on a Forfar side who were on the wrong side of a 16-1 defeat at Ainslie Park earlier this year in the SWPL.

McCulloch isn’t reading anything into that victory against what was a young Forfar side, “Two games are never the same and we anticipate a tough challenge against Forfar this weekend.

“We played extremely well in our previous fixture and will have to be at our best to defeat a side who has been achieving positive results recently.”

The post-split season has taken in SWPL fixtures, an International / free weekend & now it’s time to turn collective attentions to the Scottish Cup.

The Spartans Manager knows her side will need to be on top form against a rejuvenated Forfar side who defeated Queens Park 0-2 in Glasgow last Sunday.

“The Scottish Cup is a special competition to be part of and we look forward to being given the chance to progress to the next round. A cup game is a one off game and as ever we want to be in the hat for the next round but we will need to perform like we have been recently to ensure we get the result we want and deserve.

“Playing in the top six every weekend means you face tough and close games every week and we have prepared in exactly the same manner as we usually do.”

Last week’s encounter with Aberdeen saw the return to action of both Claire ‘Bing’ Crosbie & Kirsty McLaughlin, something that greatly enthused their Gaffer.

“It was fantastic to give Bing and Kirsty some time back on the pitch last weekend against Aberdeen. Both their attitudes throughout this tough recovery process have been brilliant so it’s no more than they deserve.

“It’s still early stages but to have them both available to play a part in the team going forward is fantastic for the club. I thought they both did extremely well when they came on against Aberdeen and they are keen to build on their progress made so far.”