Spartans have enough in Reserve to see off Caledonia 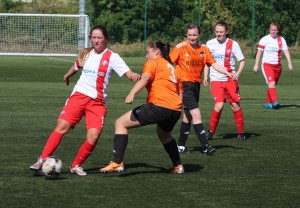 After their recent defeat to champions-elect Motherwell, Lynsey Cowan’s side were determined to get back to winning ways as Spartans Reserves took on Edinburgh Caledonia in the sunshine at Ainsle Park.

Spartans opened the scoring after just 8 minutes after former Caledonia player Chelsea Neil collected the ball at the edge of the box following patient midfield build-up play and calmly slotted it past the visitor’s goalkeeper to take an early lead.

Sophie Cunningham and Lucy Brown continued to trouble the Caledonia defence and it was Brown’s dancing feet that were taken away from her as she was brought down just outside the penalty box.  Captain Nichola Sturrock stepped up and her low and hard effort was misjudged by the goalie who let it slip into the net.

Just a few minutes later, Edinburgh Caledonia were back in the match.  A cross from the right hand-side found its way into the Spartans box where a welcoming Caledonia striker’s back post effort was deflected past a stranded Erin Rodgers to reduce the lead to a single strike.

Spartans regained their lead in the 58th minute when Nichola Sturrock scored her second of the game.  Chelsea Neil’s initial effort was well saved before the ball fell to Sophie Cunningham who cut back to Sturrock who chipped it over the stationery defenders and goalkeeper and into the net.

Both sides were drawn into a midfield war of attrition as the game progressed.   There were additional chances for Sophie Cunningham, Sarah Shaw and Kayleigh McNeil however the home side couldn’t add to their earlier tally and kept their two goal cushion until the final whistle.