Spartans keep on trucking with win against Buchan 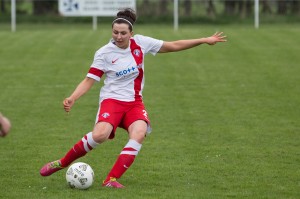 Natasha McMahon scored her first goal in Spartans colours as her side secured a vital three SWPL points with a 2-5 win on the road against a physical Buchan outfit at Maud’s Pleasure Park.

A makeshift Spartans made the 320 mile round-trip against basement outfit Buchan with Natasha McMahon the solitary sub on the bench due to illness & injury.

Spartans looked to build on their win over Forfar and Montgomery came close within the opening minutes but her shot cleared the bar.

Shepherd’s probing long ball into the box was headed narrowly wide by Reilly as the visitors looked to establish themselves and grab an early lead.

Spartans made an 18th minute breakthrough after Marshall released Mason into the box who invited the challenge that left Referee Morag Pirie with the easiest decision of the day.  Ewens stepped up and drilled the ball home.

That lead extended in the 28th minute when Montgomery collected the ball 25 yards out and her well placed curled strike nestled into the Kennedy’s bottom corner.

Moments after the restart the hosts were awarded a penalty of their own & Donna Louise Paterson narrowed the lead from the spot.

The two goal cushion however was reinstated when Alana Marshall’s free-kick went deep and Katie Reilly was on hand at the back post to knock in Ewens’ header.

Five minutes after the interval, McCulloch’s side extended their lead.  Tenacious play by Tracy Donachie to recover possession in midfield saw Montgomery surge forward before setting up Mason who crashed the ball in off the crossbar.

With 20 minutes remaining, sloppy defending allowed Lydia Johnston to pull a goal back for the hosts.

Spartans rallied and Ewens was desperately unlucky not to grab her 2nd of the day when her goal bound effort was cleared off the line.

Any hopes of a late comeback from the home side looking to secure their first points of the season were dashed with a phenomenal strike by Natasha McMahon.  The substitute opened her Spartans account with a sweetly struck 35 yard strike that sailed high over Jodie Kennedy’s head in the Buchan goal.

Spartans Manager Debbie McCulloch was happy to record a win on the road, “It was a frustrating game for us today in what was the most physical 90 minutes we’ve played in the SWPL for a while and I felt it was getting into the player’s heads a bit.  That said, we controlled the game and had a lot of possession and ball during it.

“The last time we played here we only managed to score 2 and this year we’ve scored 5, although the two goals we lost today were sloppy and we’ll look at the causes of them at training during the week”

On breaking her goalscoring duck, Natasha McMahon said, “Naturally I was happy to have scored my first goal for the Club. I’m just glad to be back in the squad after injury and getting game time, to get a goal is a bonus.

The defender was in two minds before unleashing the shot that earned her wonder goal. “I had the bench yelling at me to shoot and team mates shouting for the ball, so i just put my foot through it and it went in!”