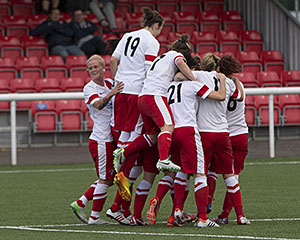 Spartans Women will kick-off their league campaign with a home fixture against Hamilton Accies on March 16th as the curtain raises on the SWPL season.

Debbi McCulloch’s side also entertain Accies, who finished top of the bottom half of last season’s split, at the Academy on the 9th February in a pre-season friendly.

Then the Ainslie Park side head along the M8 for the first of three back-to-back games against Glaswegian opposition.

First up is a trip to Petershill Park where Rangers will be hosts for what promises to be a fantastic East v West battle.  Spartans pulled off a 2-3 win when the sides met in September, Sarah Ewens and a Lana Clelland brace securing the points.

Spartans then welcome Glasgow City to the Capital before heading back along the motorway to take on Celtic at Lennoxtown.

The fixtures for the opening half of the season also see away trips north to Buchan and Aberdeen before the season head into its summer break at the end of June with an Edinburgh derby against Hutchison Vale at Saughton.

With 6 SWPL home games already confirmed and a host of pre-season friendlies, now has never been a better time to buy your Spartans Women’s Season Ticket.  At just £40, you’ll make significant savings on walk up to the gate admission prices.  Pick your ticket up on Sunday ahead of the pre-season cross-border friendly against English WPL 2 outfit Durham (1pm kick-off).

Spartans Women also have opportunities for you to invest in our success in 2014, including match day, match ball and player of the match sponsorship packages.  Please contact Mark Brown on 0776 4149767 or email contact@spartanswfc.com for further details.