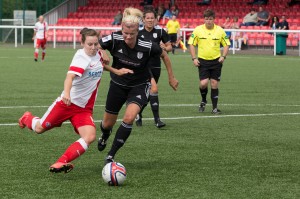 Lady luck deserted a spirited Spartans in a six goal thriller against league leaders Glasgow City as the second half of the SWPL got underway at Ainslie Park.

A double from Sarah Ewens and a phenomenal display between the sticks by Rachel Harrison – who joins striker Kerry Montgomery in the Scotland camp ahead of next Sunday’s Challenge Match against Wales at Palmerston Park in Dumfries.

Spartans welcomed City to the Capital for the second time this season and from the outset, the Glasgow outfit were on the attack with Emma Black forcing Harrison into an opening minute save.  The ball broke free to Leanne Ross who couldn’t divert home.

A speculative long range effort from just outside the edge of the box by Alana Marshall, playing in her 50th game for the Club, brought the home support to life as Spartans responded well to early City pressure.

Three goals in a ten minute spell however changed the complexion of the contest.

In the 21st minute, a Fiona Brown shot was saved well by Harrison however she could only parry it into the path of Abbi Grant who tapped home from close range with the home side appealing for a foul on Reilly at the beginning of the move.

On the half hour, a perfectly flighted cross by Suzanne Lappin was headed home by Julie Nelson who was afforded the freedom of the home six-yard box.

Worse was to follow just two minutes later for the home side as the triple whammy was completed. Ross saw her shot crash off the bar and the ball broke to Eilish McSorley who obliged by making it 0-3.

Spartans pulled one back ahead of the interval through Sarah Ewens. The prolific striker made space in the box to leave her defender and dip the shoulder to thump the ball home.

Cometh the hour, cometh the most contentious decision so far this season. A Leanne Ross free-kick was whipped in on Harrison’s goal. The in-form keeper got enough of her fingertips to the ball to push it on to the crossbar. The ball hit the line and bounced to safety – or so the 22 players on the pitch and Referee Rennie thought.

Unfortunately for the Spartans players, bench and supporters in the stand, the far side Assistant raised his flag to his waist and made a dash to the centre of the park to signal a goal.

Spartans rallied once again and were the better of the two teams in the second forty-five minutes.

A stunning free-kick from 20 yards from Sarah Ewens reduced the deficit back to two as the striker grabbed her 20th goal in 13 games with a thunderous strike that left the City keeper with no option than to retrieve the ball from the back of the net.

Ciara Barnes had a chance to set up a tight finish however the defender was caught off-balance with the goal at her mercy and she agonisingly watched as her attempt sailed over the bar.

Post-match, Spartans Manager Debbi McCulloch spoke of her pride in the players in a pulsating game that was a great advert for women’s football.

“I was really proud of my players today and I thought they did exceptionally well. I told them that I didn’t want them to play with any fear and I never set the team out to ‘park a bus’ and I felt especially in the second half we played extremely well. We got tight to City, didn’t allow them any space, we frustrated them and made their play predictable.”

“This season the players are far tougher than this time last year – both physically and mentally. We lost both games heavily against them however this season it’s been a far tighter contest and we have competed a lot better. I think this shows the strength of character we have in the changing room and bodes well for a decent second half.”