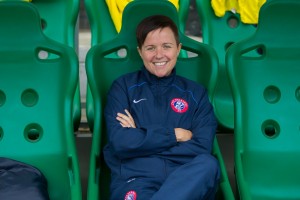 The curtain comes down on SWPL 2015 at Albyn Park, Broxburn this afternoon (Sunday) when Spartans travel to Albyn Park for an end of season ‘Edinburgh’ Derby against Hibs Ladies.

It’s an end of an era too for the Ainslie Park side as Debbi McCulloch leads her charges into battle for one last time, with her team looking to give the Manager the perfect send off with victory against Chris Roberts’ side.

After an enforced rest weekend courtesy of the International Team’s successful Euro qualifying exploits, it’s back to league action for the final time, with McCulloch aiming to claim three points and cement a fifth place finish in what has been one of the most exciting top flight seasons yet.

The hosts head to the Spartans Academy next week for the Scottish Cup Final showdown with Glasgow City.

The game at Albyn Park kicks-off at 2pm.