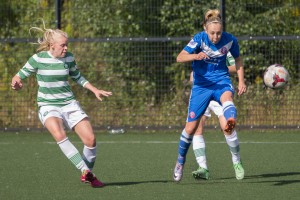 Spartans will be out to extend their four match unbeaten league & cup run at Ainslie Park this Sunday when they entertain Celtic Women in the penultimate game of the SWPL season.

Celtic head across the M8 looking to end their miserable run of five games without a win whilst Debbi McCulloch’s side go in to the game keen to build on victories against Glasgow City, Inverness City, Rangers and Aberdeen.

The Spartans Manager knows her players will need to be on top form to defeat David Haley’s Hoops for their first time this campaign.  “We have been playing some the best football I’ve seen us play this season over the last month or so, and the momentum is certainly with us going into Sunday’s game.  It’ll be another close game against Celtic, just like the two previous encounters this season so far.

“I was disappointed that we didn’t take anything from either of those fixtures, which were both on the road, however we have home advantage this time round and with our supporters behind us, we will fight for every ball in order to continue our winning run and defend our proud four match run where we have seen nine goals scored by eight different players whilst not conceding a goal.”

Walter McGill’s Reserves look to build on last week’s victory over league leaders Hearts Development when they travel to take on Seton Ladies.