Spartans lose out to City in latest SWPL clash 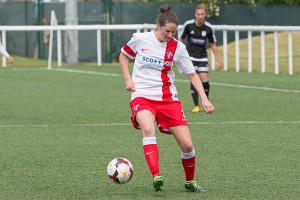 A frustrating 90 minutes at Ainslie Park saw Spartans lose out 0-2 to Scott Booth’s Glasgow City in a game that, on another day with Lady Luck shining over North Edinburgh, may have offered a more favourable outcome.

Spartans were looking to end City’s unbeaten run in the league however that didn’t look promising when after just 30 seconds, City took the lead.  Cuthbert drove down the middle almost from kick-off, her shot deflected into the path of O’Sullivan who tapped in from close range.

The goal certainly woke up Debbi McCulloch’s side and just 3 minutes later Shepherd cracking net-bound effort was blocked as Spartans looked to get back on level terms.

Reilly was next to penetrate the City rear guard with a one on one opportunity against Alexander, but she could only watch as the keeper pushed the Spartans Captain’s effort round the post.

Russell then broke the offside trap before laying the ball into the path of Sarah Ewens who saw her shot rise and go over the bar from inside the box.

Spartans domination was dented just 60 seconds later when City doubled their advantage.  A stramash deep inside the home penalty box saw Grant’s shot ricochet off a host of bodies before finally crossing the line despite the despairing efforts of Pagliarulo to prevent the ball breaching the whitewash.

The second half played out in the style of a midfield war of attrition with neither goalkeeper particularly troubled from their opponents strike force.

The first real chance at goal came from Jackson who whipped her effort across the six yard box for someone to claim it.  Sadly there was someone on the end off it, but it turned out to be ex Spartan Montgomery who subsequently cleared the ball.

City’s only noteworthy effort in a second forty five minutes where a depleted Spartans side continued to rally, came from a Ross free-kick that Harrison supervised over the bar.