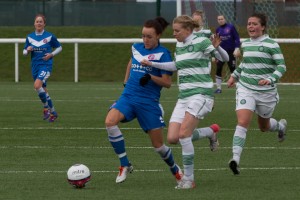 Spartans make the familiar trip across the M8 this Sunday for another SWPL test against west coast opposition. After locking horns against Rangers and Glasgow City so far this campaign, Manager Debbi McCulloch is looking for bouncebackability against Celtic at Barrowfield.

The sides last met in November in a game at Ainslie Park mainly remembered for the frequent showers of rain instead of goals, in a match that finished 1-1.

Debbi McCulloch’s side lost their unbeaten start to the SWPL against City followed by a narrow defeat on the road to Aberdeen in the League Cup last week.  Despite the double set-back, McCulloch is in an upbeat mood ahead the game  and a positive week on the training pitch has brought a renewed vigour to the side.

“That has been the message to players this week at training.  It’s done and dusted and we have to move forward.  There’s no point in dwelling about the past.  If we allow it to eat away at us, then we won’t progress forward as individuals or as a team.

“It’s another big game for us this week and we look forward to the challenge that is Celtic this Sunday.  They’ll no doubt go into the match feeling confident following their pre-season friendly win against us at the Academy, however the players have responded well and have prepared well for what will typically be another tough and competitive game.”

Boosted by the news of Louise Mason returning to the Academy last week (albeit unavailable this week due to suspension), McCulloch has no fresh injuries to note which is a decent problem for any Manager to be in.

The game kicks off a 4pm at Barrowfield, Glasgow.