Spartans push Glasgow to their City limits in narrow defeat 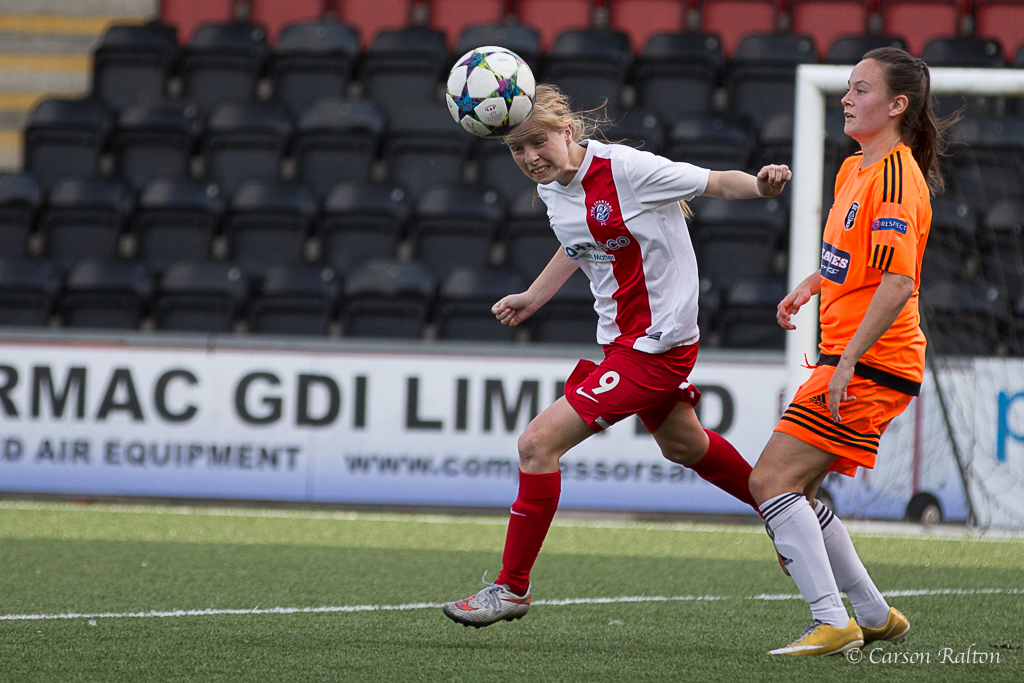 Two second half goals were enough to separate Spartans and Glasgow City in the Airdrie sunshine at the Excelsior Stadium, a scoreline that flattered the hosts and left the Ainslie Park side disappointed not to return to the Capital with at least a point to show for their efforts.

The early stages of the game were played out akin to a chess match with both sides taking time to work out their next move in an attempt to gain the upper hand.

City had much of the opening period of possession however it was the defence of the visitors that held firm throughout, leaving Scott Booth’s side frustrated.

Claire Crosbie’s threaded pass in behind the City defence looked set to put Sarah Ewens in on goal however the striker’s path to the ball was blocked by McCulloch who escaped the radar of the match officials.

Jo Love then came close when her shot was deflected on to the post whilst at the other end, a timely tackle by a City defender prevented Sarah Ewens as she looked set to pull the proverbial trigger.

Eartha Cumings, called up for the Scotland u17s squad Euro qualifiers earlier this week, was called into action when she collided with Kerry Montgomery inside the box whilst thwarting the former Spartans player.

It was almost an opener for Debbi McCulloch’s side in the 35th minute when Alana Marshall’s delightfully placed free-kick found Claire Crosbie in the box however she just couldn’t keep her header low enough to trouble Alexander in the City goal.

Teenager keeper Eartha Cumings was in action shortly after the break when she pulled off a stunning double save firstly from Lauder then Grant before the ball fell to Shine who could only find the base of the post with the third attempt in a frantic few seconds.

City were then offered an opportunity to break down the resilient Spartans defence when the Referee adjudged a Cuthbert shot had made contact with Nicola Mawson’s arm, much to the bewilderment of the Canadian.  Leanne Ross stepped up and put her side into a 1-0 lead.

Two minutes later, City doubled their lead in equally controversial circumstances.  As Docherty whipped in a cross towards the Spartans danger zone, Ronaigh Douglas appeared to be bundled to the threadbare astro surface prior to Lauder heading home.

With five minutes left on the clock, City’s Whyte looked on in disbelief as Cumings somehow managed to ensure her shot from three yards out went over, rather than under the bar.

Then, with moments left on the clock, Sarah Ewens seized upon a slack back-pass in the home defence however Alexander done just about enough to force Ewens into a tight enough angle to prevent a clean attempt to pull a goal back that no-one would have begrudged the Edinburgh side.