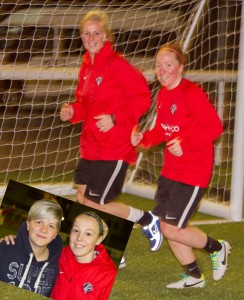 We are delighted to report that a quartet of great Spartans talent are at various and significant junctures on their road to recovery.

We caught up with Claire Crosbie, Kirsty McLaughlin, Alana Marshall & new to the treatment table, Lana Clelland at training earlier in the week.

It’s been a long and winding road for ‘Bing’ and ‘Cubes’.  Both talented players suffered agonising knee injuries during the 2013 season however the sheer dogged determination and willingness to win sees both players enter a key part of their recovery process.

Here’s what the pair had to say:

“Monday night was my first time training out on the pitch and it feels really good to be back amongst the girls and I’m looking forward to getting back involved.  I’ve been running for around six weeks now and in the gym so it’s great to be finally outdoors.

I hope to be back in time for the start of the second half of the season – that’s my goal.”

“I’ve just been working on my hamstrings and my quads to make them stronger and I’ve been moving on to do squat jumps , changing direction etc so it’s all going well so far.

It depends how my body reacts to the process however I’d be hopeful for a return in the summer but I’ll see what my knee thinks.  I’ll not be rushing it as I certainly don’t want to be doing this again!”

A earlier return to the squad however is more favourable for Alana Marshall.

“It’s been a depressing six weeks but I’m finally back running about – it feels amazing! Hopefully in another two weeks I’ll be back joining the squad again.

With the work I’ve been doing with the physio team, I hope to be back taking contact within the next 2-3 weeks. My running and twist / turn movements are getting stronger every week so fingers crossed I’ll be back in the match day squad soon.”

“In training with the National team, we were doing some 1v1 exercises, I went to stop the ball and my ankle went both ways unfortunately.  I’m delighted that the diagnosis has been positive and I’m be focussing on my rehab soon with a view to getting back on the park as quick as possible.”