Spartans rely on moment of Marshall magic to down the Dons 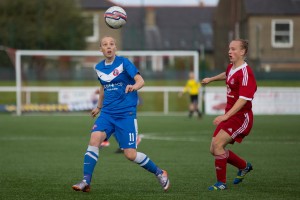 Manager Debbi McCulloch put her faith in the same Spartans side that defeated Rangers in midweek and it was repaid with a 1-0 win against Aberdeen at Ainslie Park.

A stunning 59th minute goal from Alana Marshall made it three SWPL wins in a row for McCulloch’s side against an Aberdeen team they are due to face for the fifth time this season in the semi-final of the Scottish Cup later this month.

Aberdeen travelled to the Capital for the second time this week looking for a more favourable outcome than the one they had at Easter Road on Tuesday evening.

The visitors started the game off well with Hannah Stewart whipping in an early cross which saw Spartans keeper wade through a plethora of bodies to claim.

Trisha McLaughlin came desperately close to breaking the deadlock after Sarah Ewens made space to reach the byeline. Her cross fell to McLaughlin who saw her shot clear Rebecca Flaherty’s goal.

Flaherty was to be the difference between the two sides with some fantastic saves, one of which denied Kirsty McLaughlin from scoring with a thumping drive. The Aberdeen keeper acrobatically tipping the ball over the bar to keep the scores level.

The Scotland u/17s keeper, who played in the International v Ireland earlier in the season at Ainslie Park, pulled off another fine save, this time from the head of Claire Crosbie as Spartans pushed forward before the break.

The opening exchanges of the second half went without incident with a midfield war of attrition in place as both sets of players searched for a way to goal.

That goal came just before the hour mark. Alana Marshall picked the ball up just inside the Aberdeen half before driving forward and unleashing an unstoppable drive from fully 35 yards out that left Flaherty floored and sent the home support wild.

Trisha McLaughlin was unlucky not to double the Spartans lead shortly after when her cross / shot cannoned off the crossbar and away to safety.

Spartans Manager Debbi McCulloch was happy to gain another 3 points, “I think we made it tough for ourselves today and that was our message at half time. We had the majority of possession and perhaps we could’ve scored more team goals however Alana’s strike was top drawer.

“It was also great to get another clean sheet.  Rachel  wasn’t particularly threatened today however she’s been pulling off some great saves and the back four have been outstanding recently.  Sometimes when you win games, the defence doesn’t get a lot of credit.  Suzi Shepherd has been absolutely outstanding, Danni Pagliarulo never gives up and is very tough to beat and Alana Marshall and Steph Briggs have been in great form also.  It’s good to when you get that blend and its working.”

Alana Marshall, netting her fourth goal of the season, said, “I felt the game was crying out for a goal and it wasn’t working for us from open play, so when I saw the space opening up, I thought I’d just have a bash and it flew off my left peg straight into the net. “

“It’s great to have made it three wins on the bounce and that’s a reflection on how well we’ve bonded as a team and created a greater understanding as a unit. Everyone has got each other’s back on the pitch and the support we give to one another has helped us gel and has definitely been a catalyst behind our recent run of fantastic results.”

It was a winning afternoon too for Walter McGill’s Reserves who defeated league leaders Hearts Development 1-0 on the Community Pitch courtesy of a Lucy Brown goal.