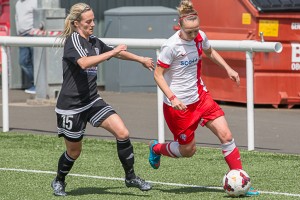 After a pulsating climax to their opening Top 6 encounter against Rangers, Spartans welcome Scott Booth’s Glasgow City to Ainslie Park in the latest round of the SWPL 2015 season.

Spartans, the only side to have defeated City in domestic football in almost seven years, will be looking to seek revenge for the recent Scottish Cup defeat on their home patch.

Just 3 points separate Debbi McCulloch’s side from third place Celtic and a win is vital to close the gap on Hibs and City at the top of the table.

Last weekend’s hat-trick hero Sarah Ewens goes in to the game boosted by her call up to the forthcoming Scotland Women’s National Team training camp.