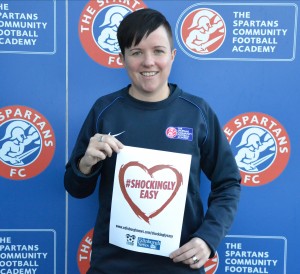 Spartans Manager Debbi McCulloch has described how she is proud to support the Edinburgh Evening News’ “Shockingly Easy” campaign as she took the ‘pledge’ to spread the word about the appeal in order to raise awareness of the life-saving pieces of equipment.

The campaign, in memory of 13-year-old Jamie Skinner, aims to put a defibrillator in every sports centre in the Lothians. More than £30,000 has already been raised – enough to buy more than 20 of the heartstart machines – and more donations are pouring in all the time.

McCulloch, pictured holding the #shockinglyeasy campaign poster said, “I’m delighted to support such a great cause and help raise awareness of the campaign.  We are fortunate to have a defibrillator here at the Academy and several members of the staff are trained on how to use it.

“It’s important to have such a vital piece life-saving equipment on the premises where we see hundreds of people of all ages and abilities over any 24 hour cycle and if this campaign helps raise awareness and funds to ensure more organisations can obtain one, that would be a magnificent achievement.”

In November, thanks to the overwhelming generosity of fans, together with donations from players & management of both Spartans and Hibs Ladies, we helped raise a fantastic sum of £922.50 for the Jamie Skinner Foundation at our final SWPL game of the season.

Members from Spartans and The Jamie Skinner Foundation met with Lothian MSP Alison Johnstone on the day and both organisations were humbled to learn that the MSP had raised a Parliamentary Motion (S4M-11384) at Holyrood.

“That the Parliament recognises the support of Spartans Women FC for the Shockingly Easy campaign to place life-saving defibrillators in sports clubs across the Lothians; commends the club’s gesture to donate the gate receipts from the Edinburgh derby match against Hibernian Ladies on 2 November 2014 to the Jamie Skinner Foundation (JSF); notes that JSF was set up in memory of the 13-year-old Hearts player who died following a cardiac arrest on the football pitch; considers Scotland’s sporting clubs to have a vital role in raising awareness of health issues and the importance of emergency response, and believes that, with its sporting institutions, communities and parties across the political spectrum working together, Scotland can make great strides toward preventing further such tragedies.”
December 12, 2014 Mark Brown
News