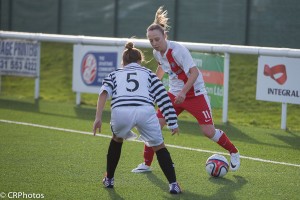 Spartans were made to fight hard for another three SWPL points as they secured a 2-1 win over Queens Park in a game that was a case of “winning ugly” at Ainslie Park.

Goals from Kerry Montgomery and Trish McLaughlin either side of half-time saw Debbi McCulloch’s side secure a sixth league win on the bounce.

In what were glorious overhead conditions in North Edinburgh, Spartans took the game to the visitors from the off and Sarah Ewens was unlucky not to add to her 18 goal tally so far this season when her strike from the edge of the box narrowly cleared Laura Williamson’s crossbar.

It didn’t take long before the home side took the lead and it was Kerry Montgomery who broke the deadlock, much to the delight of the home support, with a right footed shot that left the Queens keeper with no option than to retrieve the ball from the back of the net.

The Spiders were back on level terms in the 28th minute after Valentina Mazzoni broke the Spartans offside trap to slide the ball under the advancing Rachel Harrison into the empty net.

Spartans almost regained the lead when Ewens raced into the box from deep however it took a well-timed tackle by Helen Macleod to prevent the in-form striker as she went to pull the trigger.

At the other end, Kirsty Hamilton’s no-nonsense challenge prevented Mazzoni from edging the Queens Park noses in front on the stroke of half-time.

The second half was just three minutes old when Spartans scored what proved to be the winning goal of the afternoon.

Trish McLaughlin leaped above the Queens Park defence to get her head onto the end of Alana Marshall’s cross and score her 20th career goal for the Club.

Referee Allan incurred the wrath of the visitors when she awarded an indirect free-kick after Williamson’s short goal-kick failed to make its way outside the 18 yard box.  Thankfully for the visitors the resultant set piece failed to punish them further.

Drama was to follow in the 78th minute when, as played raged on towards the Glaswegian’s goal, the far-side Referee’s Assistant brought to the attention of whistler Vikki Allan an alleged incident that, after a lengthy debate, saw Danni Pagliarulo being shown a straight red-card.

Queens pushed for a second equaliser of the afternoon however staunch defensive play by Suzi Shepherd and her fellow back-line kept keeper Harrrison’s goal further intact and secured another three points for Debbi McCulloch’s side.

Manager Debbi McCulloch was delighted to secure the win but also praised her side’s opponents for their desire to play football over 90 hard minutes.

“I said earlier on the week – and to the players before the game – that Queens Park were not befitting their league position and full credit to them, they came here to play football and it was good to see them try that.

“I felt we were slow to start and perhaps a wee bit lazy off the ball at times, but we grabbed an early lead that we deserved on the balance of play. Fair credit to Queens Park and they came back into it and equalised.

“I had to get the hairdryer out at half-time and try and get the girls more up for the game and push them on a bit. I was happy with the response in the second half and even with the sending off, I thought we were looking fairly comfortable to secure the three points.”

The game lacked fluidity at times and to coin a phrase, Spartans ‘won ugly’.  For McCulloch, the points can sometimes mean more than producing the perfect performance week in, week out.

“We’ve had five intense challenges of late and you are going to get games like today’s.  Great teams win games like that and as I said to the squad post-match, even if we play well or indifferently yet come away with the win in the manner we did today and put that level of work ethic in, you’ve just got to take it.”