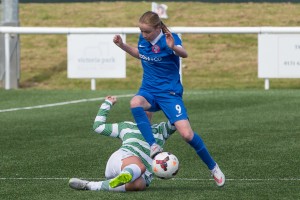 Spartans were left counting the cost of being unable to turn possession into points as Celtic heading back along the M8 with a 0-3 victory for their efforts at a blustery Ainslie Park.

There was a return between the sticks for Rachel Harrison who recovered from injury and Suzy Shepherd, fresh from her coaching licence exploits.

The visitors had the best of the opening chances with Sam McManus sending her shot wide of the goal frame after finding herself one-on-one against Harrison.

It was blowing a hoolie at pitch level and this saw the ball spend much of it’s life off the 3G carpet, making our impromptu ball-boy on the stand side work for his admission money.

When the ball was in play, Spartans had the bulk of the early possession and Sarah Ewens was desperately close not to break the deadlock after Bobby Beveridge’s cross into the box found the striker however her effort was inches wide.

It was the visitors who found their way to the back of the net first with five minutes before the break.  Harrison was forced into a save down low, turning Littlejohn’s shot round the post.  From the resultant corner, Dalgleish finally forced the ball home after Harrison pulled off a stunning save from a McManus header.

Spartans started the second half with some gusto as they looked for an early opportunity to pull back the solitary strike that separated the sides at the interval.

The swirling wind continued to play havoc with both goalkeepers somewhat untroubled as the half progressed.

There was a half chance for Katie Reilly just after the hour mark when a Louise Mason corner met the Captain’s head, only for the ball to fall wide of the Celtic goal.

With 20 minutes left, Coach Jimmy Burns, deputising for Debbi McCulloch who is attending her A Licence course, replaced Morgan Mitchell and Ronaigh Douglas with Michelle Russell and Carla Jackson.

Two goals in as many minutes from Celtic ensured the points headed West as they delivered a double whammy through Joanne Paton and Sam McManus.

With almost the final play of the game, it was almost icing on the Celtic cake for Littlejohn who could only look on in disbelief as Harrison somehow managed to tip her impressive 20 yard strike onto the crossbar before seeing the ball hoofed to safety.

Meanwhile, our Reserves continued their winning ways with a 2-6 win away to Edinburgh Caley.  Captain Nichola Sturrock found the net four times, including one from the spot and there was a double from teenager Sophie Cunningham in the victory at The Jewel.