Spartans succumb to Celts in the sun 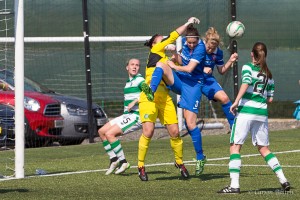 In unprecedented summery scenes at K-Park, Spartans were stunned in the East Kilbride sun when they went 1-0 down after just three minutes.  A free-kick was awarded out wide for an alleged transgression.

Spartans keeper Eartha Cumings came to collect but could only parry as she looked to have been impeded on the penalty spot.  The ball broke to Kelly Clark who didn’t wait for the whistle and she popped it home, much to the frustration of the visiting bench.

Cumings, who was somewhat winded in the challenge, carried on and she was called into action minutes later, denying a Celtic attack by bravely diving at feet next to her left hand post.

Spartans came close shortly after when Sarah Ewens took a run into the Celtic box and it took a fine Gemma Fay save to thwart the dangerous striker.

Ewens almost turned provider for Ronaigh Douglas to equalise however, just as the youngster was set to unleash her attempt from the edge of the box, a timely block sent the ball spiralling away to safety.

Despite Spartans having the lion’s share of opportunities, Littlejohn put Celtic further ahead with what looked like a mis-hit shot that eventually looped over the head of Cumings.

As the first half drew to a close, Michelle Russell let fly from long range, only to look on as her thunderous strike rattled Fay’s crossbar.

The tenacious Douglas was continuing to torment the home defence and much to the bemusement of the visiting dug-out, only a throw-in was the ‘reward’ after another robust challenge on the young Scotland hopeful went unpunished by the whistler.

In the 53rd minute, Celtic extended their lead.  Mandy Fulton’s acrobatic attempt doing enough to squeeze past the outstretched hand of Cumings.

With a quarter of an hour left, Louise Mason found herself in a one-on-one with Fay however the shot was well saved by the stalwart stopper.

Spartans were rewarded for their persistence in the 79th minute when Ciara Barnes rose like a salmon to bullet her header into the net after a well-weighted Alana Marshall corner-kick.

After making her SWPL debut seven days previously, u/17s starlet Ellie Simpson made her second appearance off the bench in as many games when she replaced Louise Mason.