Spartans taking nothing for granite against dangerous Dons 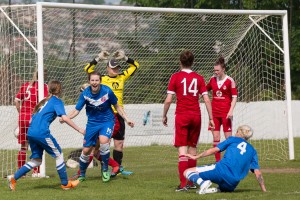 Spartans welcome Aberdeen to Ainslie Park for the first time this season in what’s being billed by many as a dress rehearsal for the forthcoming Scottish Cup Semi-Final show down at Ravenscraig.

However, the immediate focus for the in-form Spartans is three championship points in Round 18 of what’s proved to be one of the most competitive SWPL seasons since its inception.

After back-to-back clean sheet SWPL victories against newly crowned champions Glasgow City and Rangers Ladies, Spartans go into Sunday’s clash keen to continue the momentum that has seen them leapfrog the third west coast side in the Top 6, Celtic, into 4th place.

The tale of the tape so far gives Spartans the upper hand against now familiar foes with two victories on the road on league duty however a narrow League Cup defeat early in the season gives the Reds hope in completing a Cup double against the Ainslie Park side.

Looking ahead to the fourth of five games against the ladies from the Granite City, Head Coach Mike Ross said, “Sunday’s game will once again be a difficult challenge against a tough Aberdeen side who are coming off the back of two energy sapping games and will be looking to snatch three points to close the gap on us.

“There aren’t many games left in what’s been a very competitive league and we’ll remain focussed on the task in hand which is to win each game as they come and continue to seek a higher position in the table.”