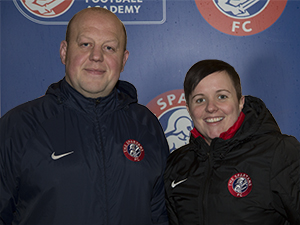 Spartans FC Women have appointed a new Media Manager as preparations for the 2014 season begin to take shape both on and off the field.

Mark Brown has joined in a voluntary capacity, helping to improve the club’s outreach to all media platforms, write articles for both the website and match day programme and control the club’s social media accounts, both on match days and throughout the week.

Brown brings a great deal of experience to the role and is already a familiar face around the Academy, working as part of the Communications Team for the Lowland League Spartans Men side.

With the assistance of placement students, the club looks forward to engaging with as many supporters as possible – both old and new – in what promises to be an exciting season ahead.

Mark said, “I am honoured to be offered the opportunity to work with a progressive and forward thinking club.  Having been part of the Communications Team within the Men’s side for the last 18 months, I’ve been impressed by the Club’s family ethos and look forward to promoting these values to a wider audience in what promises to be a big year for the Club.”

Speaking of the appointment, Spartans FC Women Manager Debbi McCulloch commented, “I’m delighted to welcome Mark on board.  He’s been a keen supporter on the side-lines and he’ll be a great asset to the Club.”

Club Manager Carson Ralton noted, “Having Mark on board is a great addition to the backroom at the Club and both myself and Club Chairman Walter McGill enjoy the enthusiasm and energy he brings to the table. We look forward to working alongside Mark who has already shown what a great asset he will be to the Women’s section”