Stalwart Shepherd looks to down Dons as SWPL returns 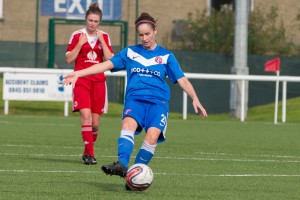 Spartans are back in SWPL action this weekend when they take on third placed Aberdeen at Ainslie Park.

After a dogged and determined comeback against Rangers, where a last minute Carla Jackson strike gave Debbi McCulloch’s side a sensational 4-5 win, Spartans stalwart Suzy Shepherd is heartened by the performances of her colleagues in the post-split Top 6 games so far.

“Looking back, I think it shows the character within the squad and the players individually at the moment to have come back from 2-0 down to eventually go on and win the game v Rangers then put in a great performance against City too.

The 39 year old Fitness Instructor said, “Our performance against City was one of the best we’ve put in against them over the years.  We dominated in large spells and probably created the most chances we’ve had in a single game against them so there are lots of positives to take into the game against Aberdeen.”

Spartans have the upper-hand against their North East counterparts in recent games, with 3 wins out of five over the last two seasons.  Aberdeen winning the SWPL League Cup clash in April 2014 whilst the sides played out a 0-0 draw last time out at Ainslie Park.

Shepherd is wary about the dangers offered by the Dons.  The defender added, “Our games against Aberdeen have always been very close and they are always a tough team to play against, especially on the road, however we look forward to taking them on in front of our own fans and creating enough chances to cause them problems.

“Our main focus is our own game and we will set out to gain full points.  With Rangers playing Celtic, a win could see us improve our league position.  Third place is still very much within our sights but we’ve got to train hard and go out and win every game to make that desire become reality.”