Stalwart striker Smollet signs off for stint in Singapore 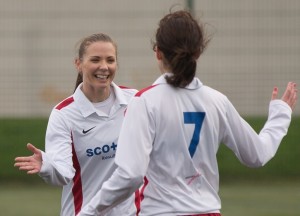 Anne Smollet signed off her Spartans career on Sunday in style with a goal in her side’s 7-1 win against Hutchie Vale Development.

Smollet will be putting her scoring shoes in storage just for now as she heads for Singapore to pursue a new challenge in her work life.

Women’s Chairperson Walter McGill said of Smollet, “Anne has been with our Reserve team for as long as we have been Spartans – since 2008.  Anne has been a reliable player who just gets on with it, whatever you ask her to do on the pitch, she is dedicated to the cause.”

Reserves Captain Nichola Sturrock said, “Anne has been with Spartans since the very beginning and has been a regular starter for the club.  She is not only recognised for being a prolific scorer, but for her tremendous work rate in both training and competitive matches.  Anne is also one of the hardest working players I’ve ever played alongside.

“Over the years as the team has changed shape and moved in new directions.  Anne has supported the management and club vision wholeheartedly and continued to give her all. I’m certainly going to miss having her around. We wish her well on the next step of her journey and hope to see her back in the future. Once a Spartan!”