We are delighted to announce that Spartans Striker Rebecca Galbraith has signed a one year semi-professional contract with the club. Galbraith was Spartans top goal scorer last season finding the back of the net on 15 occasions. This will be Galbraith’s fourth season with the club and one which the 32 year old is very much looking forward to.

After signing her first semi-professional contract, Galbraith said: “It is an honor to become one of the first  semi-professional players at Spartans F.C. Women. To be part of the history of this club makes me so proud”. 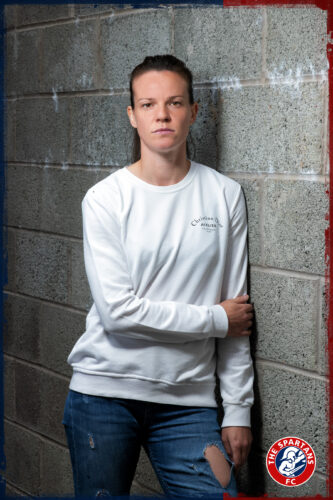 “It’s a dream come true and something that I never thought would be possible in the women’s game. I am so grateful to Spartans for giving me this opportunity and it’s something that I am going to give my all”.

Speaking about next season Galbraith fully appreciates the challenges ahead: “I expect this season to be the most intense we have ever competed in. The standard of the game is at it’s best and we are working hard in training to raise our standards and togetherness on the pitch. We are fully focused on us and our objectives.”

Manager McCulloch is delighted to get another deal confirmed: “Becky is a player who has undoubtedly improved over the last 18 months and someone who scored some really important goals for us last season.  Her pace and physical presence causes every back four in our league problems so I’m looking forward to helping Becky achieve even more on the pitch this season.”