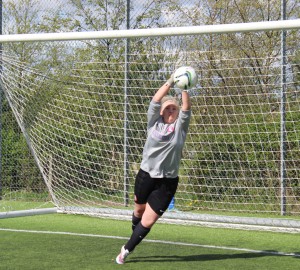 Spartans 17s took on Inverkeithing in the league and managed to secure another 3 points. Jess Murphy and Ellie Simpson bagged Spartans goals resulting in a good 2-0 victory. Spartans gave Tegan Reynolds her debut and she turned in a fine performance with Erin Rodgers (left) producing another clean sheet.

Meanwhile in the Scottish Women’s Premier League Spartans returned from Hamilton Academicals New Douglas Park with a 0-2 victory. Although Spartans  had a great deal of possession throughout the match they could not convert this into the goals perhaps their performance merited and had to settle  for just one in each half from Mason and Marshall. It was enough however to ensure another three points on the board. Hamilton’s young side defended extremely well throughout to keep Spartans strikers at bay and it shouldn’t be long before they register their first points of the season.