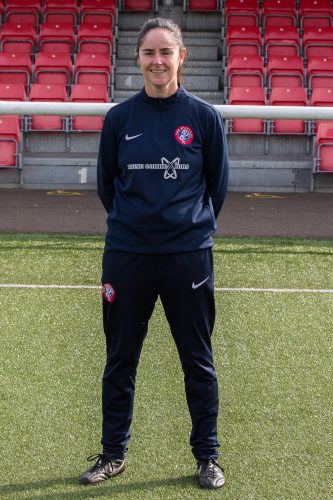 This week Suzy Shepherd made the difficult decision to step down from her role as Head Coach of Spartans.
Suzy joined Spartans as a player in 2013 before her transition to coach in 2016. Suzy’s goal during her spell at the helm was very much a rebuilding job recruiting younger players and building a team capable of challenging at the top of Women’s football. She has clearly achieved her goal with a number of top young players joining and excelling during her time in charge and leaves the club with a good young squad of players for her successor to work with.
We would like to thank Suzy for the professionalism, integrity, dedication and commitment shown throughout her four years at the club. We wish her all the best in her role as the Scotland U19 assistant coach to Pauline Hamill and for her future coaching career.
On her departure Suzy stated; “I would like to thank Spartans for the opportunity to coach at the highest level at such a great club and to all those who have supported me during my spell both as a player and as a coach.
Current coaches Ian MacDonald and Jen Malone will oversee team matters until the end of the season.