Suzy Shepherd unveiled as new Manager of Spartans SWPL side 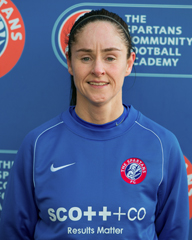 Spartans have today unveiled Suzy Shepherd as their new SWPL Manager, with the former Internationalist set to take charge officially at the end of the 2015 campaign.

Currently the SFA South East Region Under’16s Assistant Coach, Shepherd will take over the reigns as Manager from Debbi McCulloch who announced in August of her intention to stand down at the end of the current season.

Shepherd (40) has four Scottish Cup, 3 League Cup and a hat-trick of SWPL winners medals in a playing career that also seen her play in the Champions League and capped more than a dozen times for her country over a 10 year spell, making her International debut against Wales in 2001.

Speaking of the announcement, Shepherd said, “Personally, I’m delighted. Taking over the Manager’s job at Spartans is a great opportunity for me and this is an important day in my career.

“There’s things to be won – we want to compete for honours and I’m determined that we will be doing that moving forward.  It’s important everyone works hard and there is a hunger for success.  Everyone connected with the club has to pull in the same direction as we all want the same goal.”

Shepherd has played 47 times to date in her defensive role at Spartans since joining the Club in 2013 and added to her silverware haul by picking up a runners-up medal in the 2014 Scottish Cup Final.

“Spartans is a club with fantastic potential, and I think that is sometimes underestimated and undervalued by people.  I’d like thank Debbi for having the belief in signing me and her continued support over the years.  I’m delighted that she will remain as part of the Club and I look forward to continuing to work with her in her new role over the coming season and beyond.”

Incumbent Manager Debbi McCulloch said, “I would like to congratulate and wish Suzy all the success at Spartans. The new journey Suzy faces from being a player to a coach will be challenging but one I’m sure she will face without any fear. Spartans gave myself a chance to grow as a coach and I’m sure this fantastic environment will allow the same opportunity for Suzy.”

Fresh from her side’s opening Euro qualifier victory in Slovenia, Scotland Women’s National Coach Anna Signeul commented, “This is a very good appointment, both for Suzy and the Club. It’s great too that another Woman is being offered the opportunity to coach in the Premier League.

“Suzy is very experienced in the Women’s game and was an elite class player during her years within the National Team set-up. She is doing very well in terms of her Coach Education and I am looking forward to seeing what she brings as Head Coach. I think we will work very well together too.”

General Manager Carson Ralton said of the appointment, “Once we were aware that Debbi wished to step down from her role within the 1st team, we turned our thoughts to potential successors. Our number one target was already sitting in our dressing room and we had no hesitation in initially sounding out Suzy for the post.

“It is safe to say that Suzy commands a huge amount of respect in the Women’s game gathered over a long and successful playing career. Adding the experience gained as a player to the knowledge gained in her occupation as a fitness instructor, her coaching roles with the SFA, the fact that she already knows the players and how the club operates will help immensely and make the transition from player to coach a smooth one. We were naturally delighted when Suzy accepted the role.

“Suzy, currently on her SFA B Licence course, is quietly determined to succeed and this appointment was made with longevity in mind, providing a platform for Suzy to realise her ambitions to be a top coach within our game.”