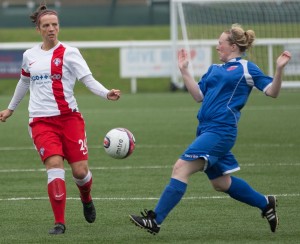 Spartans returned to winning ways with an emphatic 16-0 win over Forfar Farmington at Ainslie Park.

A double hat-trick from Sarah Ewens, taking her career total to 83 from 103 games for the Club the pick of the goal scoring feast.

Post-match, an ebullient Ewens said, “I’ve been struggling a wee bit to get goals this season but today has definitely helped boost the confidence.  At half-time we knew we couldn’t afford to be complacent and needed to go out and complete the job and all credit to the girls, we played very well as a unit today, including Rachel with her penalty save.”

Spartans started off with intent and after a couple of close calls from Montgomery hitting the bar before Briggs fired over it.

Referee Erin Cunningham was the unlucky recipient of as size 5 to the back of the head when she inadvertently blocked a Montgomery strike.  The whistler required a moment to gather her thoughts before continuing with the game.

The opening goal of the afternoon came in the 11th minute after Ewens made her way to the bye-line before pulling the ball back for Pagliarulo to tap in.

Forfar almost immediately responded after Hamilton bundled over Gallacher in the box.  After dusting herself down, the Forfar striker stepped up to take the kick however Rachel Harrison correctly guessing to pull off the save.

From there, it was all one-way traffic with Sarah Ewens scoring two goals in as many minutes.  Kerry Montgomery selflessly crossed the ball to put in Ronaigh Douglas however Keeper Brannan was equal to the task.

Ewens completed her hat-trick on the half-hour mark, followed by Ciara Barnes heading home a Louise Mason pass on the box.  Danni Pagliarulo let fly from a full 30 yards to lift the ball high into the net to make it 6-0 at half-time.

After the break, Spartans refused to take their feet off the gas as Ewens grabbed her double hat-trick whilst Montgomery took her tally to four.  Pagliarulo grabbed her hat-trick whilst Alana Marshall got in on the scoring action too.  The pick of the second half goals perhaps coming from Steph Briggs following some neat one-two play in midfield before the right back grabbed her first goal for the Club.

Danni Pagliarulo’s hat-trick was her first the Club and she dedicated to Manager Debbi McCulloch. “Debbi was giving her some stick recently about not scoring but it’s good to be on the score sheet and I’ll dedicate that to her for sticking by me.  The gaffer has been reminding me that I’ve been firing them in at training but not on the pitch, so I’m happy to repay her back for her belief in me today.”

The result was a welcome boost to Manager Debbi McCulloch, who was delighted with her team’s performance.

“It was an extremely professional performance today by the players however I don’t particularly like winning by those size of margins.  That said, it was good to see six players grab goals and all from open play.

“We switched off celebrating our opening goal and we have to thank Rachel for pulling off a great save from the penalty and keeping a clean sheet and from there we controlled the game and got everything we deserved from it.”