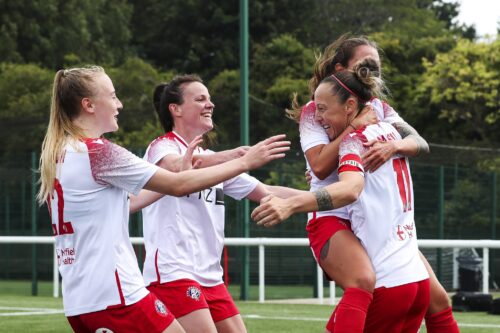 A resilient Spartans came from behind to maintain their unbeaten SWPL record against Hearts with a 2-1 win in front of over 150 supporters at Ainslie Park in their first home game of the new campaign.

Ria McCafferty made her starting debut since her recent move to North Edinburgh whilst Alicia Yates returned between the sticks in a side under the temporary stewardship of Scott Noble.

Spartans started off with intent and it took a fine save by Parker-Smith to deny Becky Galbraith from scoring her third career goal against the Maroons.

Galbraith was once again in the thick of the action when she linked up with Sarah Clelland and a dangerous cross into the box was whipped behind for a corner.  The subsequent dead-ball effort landed on Galbraith’s head however she couldn’t direct it under the bar.

Alicia Yates was largely a by-stander in the opening half hour but she was called into action to pull off a incredible double save to somehow keep the scoresheet blank.

The sides headed for the sheds for their respective team talks with defences on top.

With five minutes of the interval Spartans had two big chances to take the lead.  Sarah Clelland sending a tantalising ball across the face of goal with no takers poised for a tap-in then Becky Galbraith saw her latest effort go agonisingly wide.

It was almost like a Fringe show re-enactment of the The Three Little Pigs with the Spartans appearing as the Big Bad Wolf huffing and puffing but they just couldn’t blow that Hearts house down.

There was almost a fairytale ending for the visitors when Anderson came off the bench and also immediately grabbed the opener.

However, it didn’t take long for Spartans to get back on level terms. Alana Marshall’s pinpoint corner kick delivery caused chaos in the Jam Tarts penalty area and Becky Galbraith was on hand to nod home after Hannah Jordan’s deft flick into her path.

Spartans made a change with Louise Mason replacing Mya Bates midway through the second half.

With the sands of time ticking away and heading into the final ten minutes, the pendulum of fate swung Spartans way.  Alana Marshall’s cross into the box caused commotion in the six yards area and the ball ricocheted off a stricken defender who could only watch in what must have felt like slow motion unfold before her eyes as it rolled into the empty net.

McCafferty came off to a warm round of applause with Ronaigh Douglas entering the fray with six minutes left on the clock.

Hearts searched for an equaliser however the home defence were resolute and held out for the win, extending their unbeaten record against their opponents to eight in the SWPL.