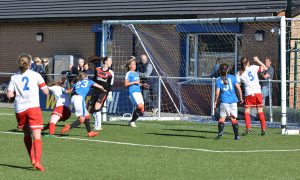 A six goal second half and a lead passing hands like a hot tattie saw Spartans score four times yet still land up on the losing side in an incredible SWPL 1 encounter against Rangers Ladies at New Tinto Park.

Manager Suzy Shepherd called Under 17s starlets Georgia Adderley and Tegan Reynolds up to the bench, two further products of the pathway system. The pair joined Eartha Cumings, Ellie Simpson and Ronaigh Douglas as players who have come through the Academy set-up to join the SWPL side.  There was also a starting berth for new signing Colette Cavanagh who recently signed from Celtic Women.

The blue sky overhead with the autumnal nip in the air made for perfect conditions as Referee Morag Pirie got proceedings underway.   It took just 9 minutes for the East v West battle to offer it’s opening goal of the afternoon.  Lisa Swanson setting up Hayley Sinclair who found the back of the net.

Sarah Clelland almost picked up on the scraps near the Rangers goal however her shot was saved.  Ten minutes later, the same player was instrumental in setting up the equaliser.  Her aerial challenge in the box saw the ball break to Cavanagh who despatched the ball high into the net to score on her debut.

Spartans took the lead for the first time in the match five minutes before the break.  Louise Mason collecting the ball a full 30 yards from goal and despite the defending efforts of Rhonda Jones to close down, the ball flew into Laura Hamilton’s top corner to offer a candidate for goal of the season.

The second half was barely two minutes old when Rangers regained the lead.  Clare Gemmell’s corner found Jones who had enough power in her header to thwart the last ditch goal-line attempts by Captain Bobbie Beveridge to keep it out.

The hosts were keen to build on their promising start after the interval and when Chantelle Brown made her way to the bye-line, her cross was met by Sarah Robertson who bundled the ball over the line from close range to give Rangers the lead for the second time.

The stand-side linesman had his work cut-out as the feral youths inside the Benburb Juniors ground persisted to play in the practice goals on the side of the pitch.  The official became increasingly frustrated throughout as the youngsters forced him into diversions whilst running up the line.  Naughty kids!

With 20 minutes left on the clock, Ellie Simpson replaced Louise Mason as Spartans continued to look for a way to get their noses back in front.

Unfortunately, the home team hadn’t read the script.  Two goals inside a five minute spell dented the Spartans revival cause in a game that was a masterclass for strikers and a basketcase for defenders.

Chantelle Brown, celebrating her 18th birthday, metaphorically and literally had the icing on her cake when she latched on to a wayward throw from Cumings to return with interest as the lead changed hands more times than a dog walkers convention at Crufts.

That lead was extended (in the game, not the dog walkers, although there were some pooches on display inside the ground) in the 78th minute when Kirsten McGuire scooped the ball into the back of the onion bag to make it 5-3.

Spartans rallied.  Ellie Simpson ventured into the Rangers penalty box and was clipped leaving the Ref with perhaps her easiest decision of the afternoon.  Up stepped Laura Gavin who was met by the energy saving Hamilton who remained rooted to the spot as the ball flew past the stationery keeper.

Spartans introduced Christie Kerr at the expense of Dion McMahon with five minutes left as Shepherd’s flock looked to salvage a point from a nail-biting finale.

It wasn’t to be.  Despite a full five minutes of Fergie Time added by Pirie, predominately through home bookings ironically for time-wasting related matters, the final equaliser remained elusive and the hosts held on to secure all three points.