SWPL: Danni set for derby showdown with second place up for grabs 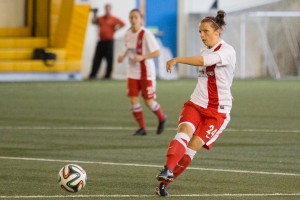 The SWPL season comes to an end this Sunday, with an Edinburgh Derby the perfect way to bring to a close one of the most exciting campaigns in the top tier’s recent history.

With the tale of the tape showing a win apiece so far this campaign, both sides will go in to today’s game looking to finish the season with the bragging rights of being crowned the ‘Queens of the Capital’.

Sunday’s visitors were the last team to defeat Spartans when the teams met back in early September whilst last time out at Ainslie Park, an enthralling encounter saw Ciara Barnes and Sarah Ewens score in a 2-0 victory which saw Hibs finish the game with 9 players.

For Danni Pagliarulo, who has played on both sides of the Edinburgh divide, Sunday’s game is no different than any other.

“It’s yet another massive game for us on Sunday. Our results throughout the season have obviously defined our position in the table but I think we deserve to finish runners-up based on our second half of the season performance.”

Victory for Celtic in the Glasgow derby v Rangers, coupled with a home win for Spartans, would see Debbi McCulloch’s side achieve that desired second place however Pagliarulo is well aware that events elsewhere can’t dictate the outcome at Ainslie Park.

“What other people do and what other teams do that’s fine, but it’s down to us alone on Sunday. The girls are up for it, the team is on a high, but we need to keep ourselves grounded and focussed as well.”

Pagliarulo and Co head into the derby on the back of a six match unbeaten run, something that the midfielder reckons has had a positive impact both on – and off – the pitch.

“I’ve personally noticed a change in the team over the course of this run. We now demand our standards to be higher because everyone has the confidence now to know we can do it, whereas at the start of the season and maybe in previous seasons, some players – including myself – may not have had that self-confidence.  It’s just a shame it’s come at the end of the season and couldn’t have been at the start otherwise who knows where we could have finished.”

Manager McCulloch added, “If the girls go out and play the way that have been recently, I’ve got no doubt that we can capitalise in this game and hope that things go our way elsewhere to finish higher than we’ve done in previous seasons.

“We know the challenge Hibs will present us with, however I don’t think there is any difference between the two teams and it’s always exciting to finish the season with a derby in front of our own support.

“We have to be proud of what we have achieved in the second half of the season no matter where we finish in this league – and that will be the message to the players ahead of kick-off on Sunday.”

Sunday will also see our U/11s from the Spartans Girls welcome the players out onto the field and they’ll entertain the Ainslie Park crowd at half-time in a mini-game.

All proceeds will be donated to the Jamie Skinner Foundation: