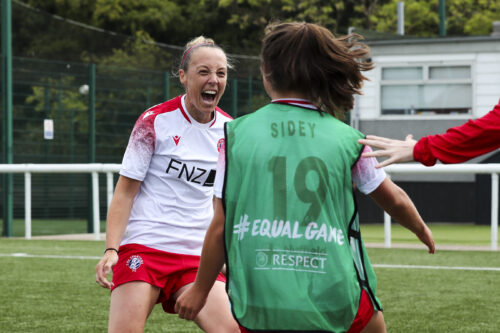 Spartans put on a dominant display at Ainslie Park to secure three points to boost the Edinburgh side up the table.

It was the visitors who started the livlier of the two sides, a cagey opening 15 minutes but the Aberdeen outfit getting forward, earning a couple early corners which Yates and the Spartans defence deal with well.

Becky Galbraith saw an early yellow card for a challenge on Aberdeen’s Campbell, Aberdeen weren’t able to capitalise on the free kick, with the score remaining level.

Moments later, Spartans would go close, great link up play in the final third saw Mason hit a first time effort which came crashing back off Meach’s post. No player could quite reach the rebound and Aberdeen were able to clear. Spartans didn’t let up, Galbraith the next to have a shot on goal, this one appeared to be blocked by an Aberdeen hand in the penalty box but the referee waved away in protests.

Alicia Yates would be the next goalkeeper to be called into action as the game continued to be end-to-end. Yates denied Ogilvie from opening the scoring for the visitors with a great save with her outstretched boot as the midfielder was sent one-on-one.

Spartans piled on the pressure in the final five minutes of the first half, chances falling for Jordan and Galbraith, but it ended goalless after the first 45.

The second half started with the home side picking up where they left off from the first half. Marshall testing Meach from range for the first chance of the half but the Aberdeen keeper collected well.

In the 56th minute, confusion all round as Spartans denied a penalty as the ball struck Ogilvie’s hand, the referee was unmoved however and play carried on. Spartans continued the attack and the ball fell out of play for a goal kick, confusion continued as the referee then shows Hannah Jordan a straight red card. Debbi McCulloch’s side needing to see out the the remainder of the game with 10 players.

Even down to 10, Spartans looked the likelier of the two sides to come away with the three points. Alana Marshall seen her close range effort well met by Meach. Clelland then seen her strike from range go close, the ball flying just over the Aberdeen goal.

It would be captain Alana Marshall to break the deadlock, another strike from range to test Meach in the Aberdeen net, the keeper couldn’t gather on first attempt and spilled the ball over the line to get Spartans a lead.

The visitors looked to equalise, Ogilvie got herself onto the end of a cross for a free header which floated narrowly wide of Yates’ goal.

In the final 15 minutes, Galbraith sealed the three points. Marshall turning provider with great technique on the through ball to send the striker clean through on goal, the number 18 making no mistake, firing the ball into the back of the net. The game would see no more goals, Spartans running out worthy winners at Ainslie Park.