SWPL | Hibs next up in SWPL 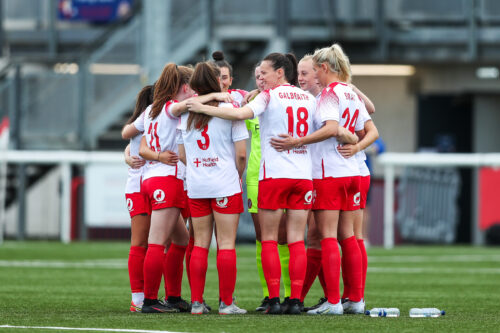 Spartans to welcome local rivals Hibernian in round six of SWPL action at Ainslie Park.

Debbi McCulloch’s side will be hoping to build on momentum set from the team’s last games at Ainslie Park. The first home game of the season seen Spartans draw with Partick Thistle, while last weekend Spartans ran out 2-0 winners over Aberdeen, an impressive showing from the squad after going down to 10 players early in the second half. That leaves Spartans unbeaten at home so far this season, a record the team and manager are keen to protect.

Hannah Jordan’s dismissal last weekend means the team will be without the winger this weekend. In other squad news Caley Gibb is working her way back from injury. Meanwhile, latest signing Amelie Birse made her Spartans debut coming on as a substitute against Aberdeen. The striker replaced goal scorer Galbraith and put in a strong showing to help the team see out a positive result.

Dean Gibson’s side will come into the game with a point to prove after a 4-0 loss to Glasgow City in their last outing leaves his Hibernian side sitting a point behind Spartans in the league table. Ainslie Park has not been an easy place to visit for Hibs over recent years, the side needing to look back to August 2019 for their last SWPL win at the Spartans home ground.

Last season, the teams both won a game a piece against each other, the other finished a 0-0 draw. Hibs are a much changed team from last campaign however, adding 10 new faces at Meadowbank over the summer transfer window.

Tickets to the game are available through Fanbase here: https://bit.ly/SPRvHIBS