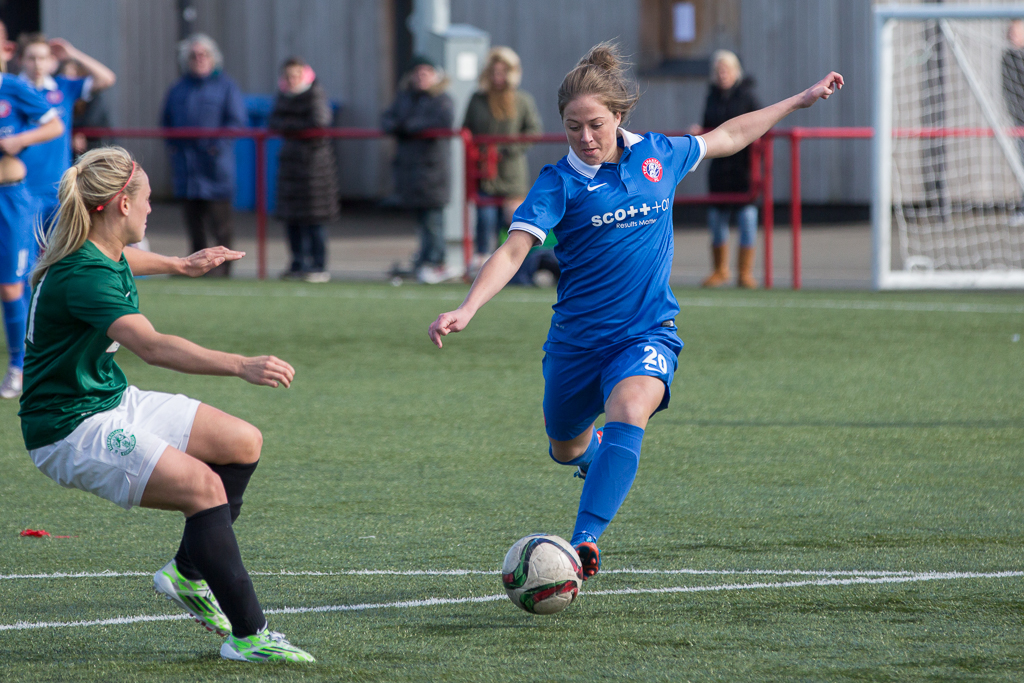 The lottery of penalty kicks ended Spartans bid to reach the SWPL League Cup Semi Final after the teams couldn’t be separated after 120 minutes of football against Hibs Ladies at Albyn Park.

Ahead of the match, the ground fell silent as players, backroom staff and supporters observed a minute silence for former Spartans Youth starlet Cammy Armstrong who sadly lost his battle against cancer earlier in the week.

Spartans Manager Debbi McCulloch asked her team for bouncebackability after last week’s defeat at home to Rangers and within three minutes, the Ainslie Park side took the lead.

Captain Katie Reilly was upended on the edge of the box for the first free-kick of the game.  Alana Marshall and Sarah Ewens both stood poised awaiting the Referee’s instruction and it was the latter who pulled off a phenomenal dead ball strike to open the scoring.

McCulloch was forced into a 10th minute substitution after Ronaigh Douglas felt the effects of a robust challenge in front of the fans and she was replaced by Patricia McLaughlin.

Both sides traded chances in the blustery Broxburn conditions, notably Rachel Harrison getting down low to push a Katy Turner attempt round the post at one end whilst Alana Marshall’s mazy run allowed Sarah Ewens to test Jenna Fife at the other.

Just as the teams were set to go in for their half time pep talk, Kirsty Smith levelled proceedings with the final kick of the open stanza.

Katy Turner had the pick of the second half opportunities with Rachel Harrison doing just about enough to force the Hibs player to hoof the ball over the bar from 8 yards out.

Alana Marshall drew applause for her nifty footwork which opened up a shot at goal from long range that whizzed past the outside of the post.

Michelle Russell replaced Louise Mason with just over 10 minutes left, with Spartans looking to more dangerous of the two teams.

Neither side could make capital from their second half chances as the Edinburgh Derby offered no further goals and advance to Extra Time.

It was once again advantage Spartans in the opening period when Nicola Mawson – back from her University lambing assignment – fleeced the Hibs defence to set up substitute Michelle Russell who connected from outside the box knowing that the back of the net was the only destination for that missile.

The teams quickly turned round at the interval with Spartans taking the most slender of leads into the final fifteen minutes of the game.

When Lizzie Arnot smashed her attempt off Harrison’s crossbar in the dying minutes of Extra Time, it looked as if the Hibs Ladies luck had deserted them.   Then, with the Referee having taken a glance at his watch, Lucy Graham poked the ball home from close range to take the game to penalty kicks.

5 players from each side bravely offered to put their heart on their sleeve and step up to the plate – or to be more precise – the penalty spot.

Sadly for Spartans, this wasn’t to be their day from 12 yards out and it was Hibs who performed a smash and grab victory, winning the shoot-out 4-1.