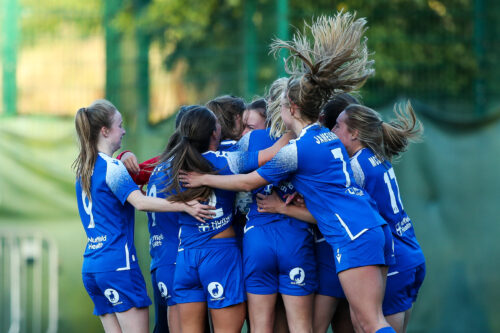 Spartans travelled to Airdrie to take on Celtic in the Quarter-Final of the Sky Sports Cup.

It was a fairly quiet opening 10 minutes with Celtic seeing much of the ball, not much in the way of chances created, neither Harrison or Tajonar being tested. Jordan and Robinson were able to link up well in the early stages, with Jordan breaking into the box before being crowded out by a host of Celtic defenders.

Celtic would break the deadlock in the 12th minute. Larisey opening the scoring after being played through on goal by Jacynta and knocked the ball past Harrison to give our hosts the lead.

Spartans were handed a golden opportunity to level just five minutes later. Tajonar caught out being too casual on the ball, Bates closing the Celtic keeper down, the goalkeeper sent her pass straight to Smart in the box. Smart was quickly closed down by the backtracking Celtic defence to deny her her second goal in as many games.

Spartans would have a second chance from a deep free-kick, McMahon floating a dangerous ball in which landed to the head of McCafferty. Tajonar with a fine catch to deny the defender her first of the season.

Six minutes before the half time whistle, Celtic were reduced to 10 as Jacynta saw red for dissent towards the match official. The red card being the last real action of the half as Spartans went into the break a goal down.

Despite being down to 10, Celtic started the half lively, in a similar vein to the start of the first half, the hosts had plenty possession without a ton of goal mouth action. Larisey having one of the better chances but McMahon was there to block her shot before it could find its way towards the net.

Spartans were piling on the pressure at the hour mark. Celtic boxed in forced to defend waves of attacks, similar to the other end, nothing by way of big chance. Minutes later, Harrison was called in to action to produce a big save. Celtic with a free header at the back post but Harrison was down quick to deny the hosts doubling their lead.

Robinson was troubling Celtic down the right hand side, the winger beating her player and breaking into the box. The Celtic defence holding firm to keep her at bay. Spartans pressure would finally pay off as some great play from the Spartans midfield. The ball was worked over to Hannah Jordan who played the ball across the face of the goal, Mason was on hand at the back post to tap in beyond Tajonar to send us to extra time.

Celtic had the majority of chances in extra time, putting Spartans under a lot of pressure. The home side hitting the post and having various shots. Harrison and the Spartans defence producing some fine stops to keep the score level. The second half of extra time was end to end, with both teams making their way up the pitch. The game would end level and Spartans would have to produce a penalty win to progress in the Sky Sports Cup.

Onto penalties and as she had all day, Harrison would produce a top save. She denied Robertson for the first penalty. Clelland would be the first taker for Spartans, she converted cooly. Kelly Clark would step up next for Celtic to convert, followed by Birse to slot home for Spartans. Chloe Craig then making no mistake from the hosts. Rosie McQuillan up next for Spartans, she rifled her penalty into the net to hold the advantage. Tegan Bowie stepped up for Celtic, she fired her over the bar.

Robyn McCafferty stood up to take the decisive shot, the centre half powered her effort home to seal the spot in the Sky Sports Cup Semi-Final.