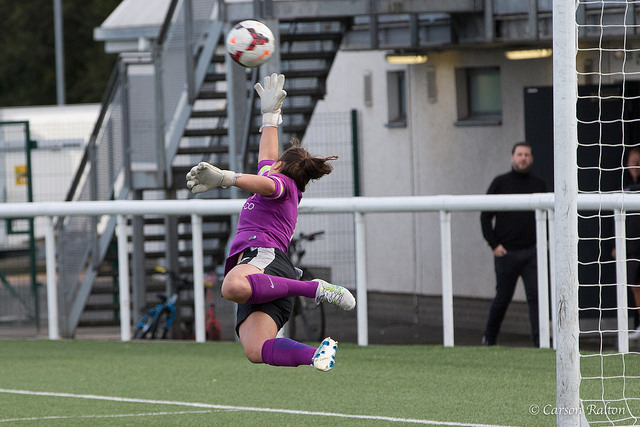 Spartans ended their home fixtures for 2016 with a disappointing 0-3 loss against Stirling University at Ainslie Park.

The visitors took the leas in the 12th minute courtesy of McDonald as both sides battled it out for a potential 4th place finish in the table.

Laura Gavin was close to getting things back on to level terms however it was an alert Logan who raced off her line to just about get enough glove on the ball to deny the Spartans striker.

Stirling then doubled their lead on the half hour mark as Jade Gallon won the foot-race to drive into the box before sending a low shot into the bottom corner.

It was a second half of little action to note and with 65 minutes played, Tegan Reynolds replaced Nicola Mawson.

Then, with fifteen minutes to go, Colette Cavanagh’s trickery saw her upended in the box to offer the home side a chance to halve the deficit.  Laura Gavin stepped up however Logan guessed correctly to save.

Danijela Rae and Ellie Simpson were introduced as the game entered its latter stages with Louise Mason and Gavin withdrawn.

Deep into injury time, the visitors grabbed a third.  Cumings collected a card after a collision outside the box with Galbraith.  Godfrey was on hand to pick up the ‘seconds’ from the resultant free-kick after the Spartans keeper could only parry.