SWPL | Spartans defeated on the road at Broadwood 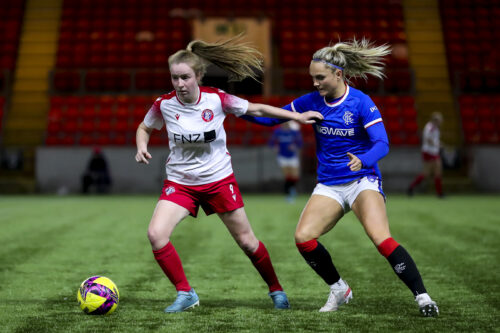 Spartans travelled to Broadwood to take on Rangers in midweek SWPL action.

Rangers started the brighter of the two sides and it paid off for the hosts. Plenty of pressure gained the Glasgow side an early corner which would see them take the lead in the 7th minute. Middag floated the ball to the back post, Cornet was there to meet it and she headed home off the post and in.

The hosts had a chance to double their lead soon after, a through ball allowing Docherty to get a shot off on goal. Rachel Harrison snuffed the shot out well to deny the hosts from doubling their lead.

Spartans looked dangerous on the counter, Clelland floated a dangerous ball into the box which the Rangers defence cleared well. Mason was next on the attack, playing a through ball to McQuillan but Easson was quick off her line to clear.

The hosts had a good chance moments after, again through Nicola Docherty who seen her long range effort rattle back off the crossbar.

Mason done well to get the Edinburgh side up the pitch and earned the team a free kick. Her resulting effort looks to have Easson back tracking but the ball landed on the roof of the net. Spartans had spells of good link-up play in the midfield, working the ball wide to McQuillan who’s long range effort floated just over Easson’s bar. Spartans were awarded another free kick just before the end of the half. Clelland tried her luck from distance but Easson saved well.

Rangers having majority of possession and chances in the first half seen them finish the first 45 with a goal advantage. Rangers started the second half in the same fashion as the first. McCoy testing Harrison with a headed effort but the Spartans keeper held onto it. The striker would eventually double the host’s tally, Rangers awarded a corner which was played to Watson. Watson delivered the ball into the box and McCoy was there to head home.

The home side continued to have plenty of possession without much in the way of clear cut chances. Both Cavanagh and Howat having shots saved by Rachel Harrison. Spartans threatened as they got forward, Bates and Galbraith linking up well but no further goals in the game and the hosts ran out 2-0 winners.