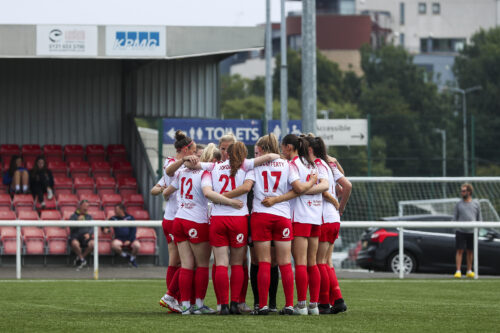 Spartans lose out to Hamilton 1-2 in a disappointing afternoon at Ainslie Park. Seeing the team’s unbeaten record at home come to an end.

The home team started the livelier of the two sides, breaking forward into the final third early but the pass is just too heavy for Smart who was entering the box. Spartans continued to pile on the pressure, coming close to an opener as Galbraith breaks down the wing. Bates jumps to get her head onto the end of the cross but the ball is just too high for the winger to nod home.

The teams then exchanged efforts from distance calling Yates into her first action of the game, neither side overly testing the goalkeeper.

Spartans would then find the breakthrough on the 22nd minute mark. The hosts earned a free kick on the wing which Sarah Clellend took. The left back hit the ball goalward, it evaded everyone and ended in up in the top corner giving Debbi McCulloch’s side a 1-0 lead.

Spartans went on the search for a second, causing a scramble on the goal line. The hosts looking to double the advantage but a foul was called. Sarah Clelland would threaten again from a free kick in an almost identical position to the goal. This one found Ross in the box who’s effort was just wide. Spartans had another chance after breaking through on the counter. Bates breaking down the left hand side but Nicolson is out well to collect the cross to Birse.

Hamilton were awarded a penalty four minutes before the half. Giard slipped in the box with McMahon being the striker being judged to have fouled the Hamilton forward. Hay made no mistake from the spot and the visitors drew level going into the half.

Spartans had a chance to regain their lead at the start of the second half. Galbraith collected the ball in the box and looked to turn and finish. The Hamilton keeper reacting well to close the striker down.

Hamilton took the lead on the 64 minute mark, Yates ran out to clear the ball but it bounced off Giard, the striker then had time to run down on goal and tap home to give the visitors a goal advantage.

Spartans would have chances from range from McQuillan and Robinson but nothing troubling Nicolson in the Hamilton goal. The best chance to equalise for the hosts would come five minutes from time, McQuillan floating a dangerous ball across the box, the Hamilton keeper failed to collect but the defence were able to clear. Galbraith went agonisingly close with a header from the resulting corner but the game would end in defeat for Ainslie Park outfit.