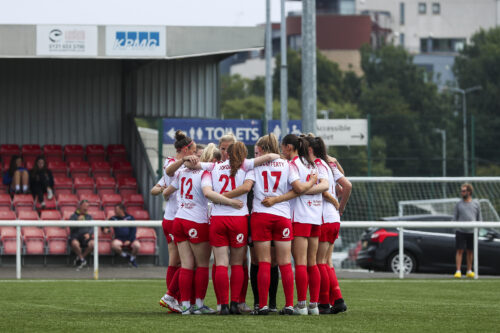 It was hosts Motherwell to have the first sight of goal, Gardner had an effort from the edge of the box well saved by Yates.

Spartans would then pile on the pressure with waves of attacks, having a corner seen off by the Motherwell defence before Reynolds floated a ball into the box from deep, Jordan just unable to get on the end of it. Spartans would threaten through the midfield with Kat Smart being hauled back on a number of occasions, both Anderson and Ronald being booked for pulling back the Spartans number 24.

The first goal of the afternoon would come courtesy of Becky Galbraith. Marshall playing a lovely floated through ball for Galbraith who controlled past the Motherwell defender and powered a shot towards goal. Mutch collecting initially but the effort too powerful for the Motherwell keeper who spilled over the line.

Marshall would turn provider again, floating a dangerous free kick into the Motherwell box. The cross landing right to Kat Smart who headed straight into the bottom corner to give the visitors a two goal lead.

Spartans would be unlucky to not go into the break three goals to the good. Hannah Jordan rifling a powerful shot goalward, Mutch equal to it, palming out for a corner. Jordan again close from the corner, Mutch punching out the six yard box but the ball landed to Jordan, her effort headed off the line.

Spartans came out the second half the livelier of the two teams. A succession of corners to begin the second 45 forcing Motherwell to defend their box once again. Ultimately, the second half would be the story of two penalties. Motherwell awarded the first penalty as Ronald falls in the box, the referee points to the spot and McDonald-Nguah sends the spot kick down the middle. A second penalty would be awarded as Doran-Barr runs into Reynolds in the 18 yard box, buying her side their second penalty.

At 2-2, Spartans still looked the likelier to win the tie, plenty chances for the visitors with Bates pace proving troublesome for the Motherwell back line,  the young winger denied a penalty of her own as her cross appears to strike a Motherwell hand in the area, nothing given.

Clelland also looking lively down the left hand side, the left-back having two chances in the dying moments. The first following a great run from her own half, the resulting shot agonisingly over Mutch’s bar. The second as Galbraith has Mutch beaten, Clelland’s effort from the cut back just wide of the goal and Spartans would leave K Park with a point.