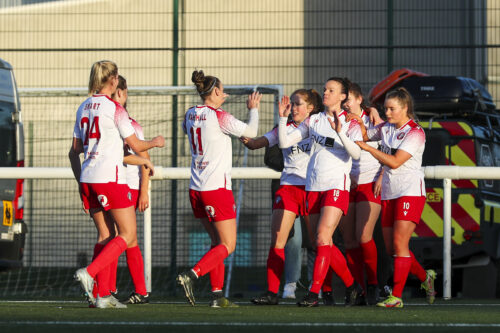 Spartans returned to winning ways with a 2-1 victory over Glasgow Women at Ainslie Park.

Spartans looked lively from the off, Marshall finding Bates in the box but her touch was just too heavy and the goalkeeper collected. Mason had a shot from range moments later but it was well gathered.

Glasgow Women took a deep free kick which resulted in a shot from the edge of the box. Yates gathered well to keep the scoreline level.

Galbraith was next to have a chance as she got on the end of McMahon’s cross but her header was well held. Moments later Marshall had a long range effort but it sailed wide of the Glasgow Women goal.

Mason continued the wave of Spartans attacks as she dribbled past Glasgow Women’s defence. Her resulting effort was just over the bar. McMahon had the best chance of the half as she sent a cross into the box which got past everyone and crashed back off the crossbar. No further chances and we would go into the break level.

Spartans continued the second half in the same fashion as the first. Smart fired a ball across the face of goal but it just evaded Birse and Bates who were running in. McMahon’s crosses again caused danger in the box as McQuillan rifled a shot goalward. Galbraith got her head on it and it went over the bar.

Spartans pressure would finally pay off as Marshall floated a ball into the six yard box. Galbraith perfectly timed her run and cooly flicked over the Glasgow Women keeper to give the hosts a well deserved lead.

Spartans looking to double the advantage as Jordan has a dangerous effort well saved.

The visitors would equalise 10 minutes later. A cross into the box was met by Gallagher at the near post who tapped by Yates.

Spartans wasted no time in finding a response. Marshall the provider again as she played Jordan through on goal. Jordan beat the goalkeeper and had the composure to tap into the back of the net for her first Spartans goal.

No more major chances in the game would seal a well deserved three points for Spartans.