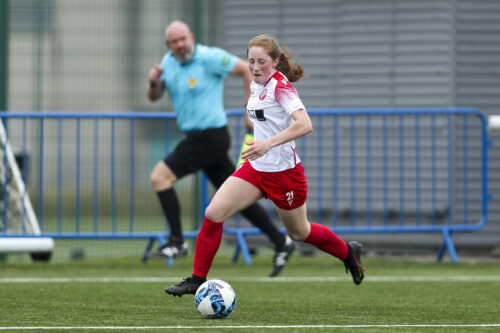 Spartans travel to Airdrie to take on Celtic on Sunday 21 August looking to build on their first win of the season over Hearts.

This Sunday sees Debbi McCulloch’s side on the road in the third game of the new SWPL season.

Spartans currently have one defeat and one win to their name after the first two rounds of fixtures, sitting 8th in the table. The squad will be looking to gain momentum following a comeback win over local rivals Hearts.

The weekend’s opposition have went two for two in the SWPL, after a convincing opening day 9-0 win over Hibernian and a comfortable 2-0 outing at Petershill against Partick.

Nothing could separate the two sides when they last met at the Excelsior Stadium, the game finishing 2-2 after two stunning Rosie McQuillan strikes and a 93rd minute equaliser from Charlie Wellings.

Both sides have made changes since that last outing in Airdrie. Wellings departed Celtic in summer along with seven other of her fellow teammates. However, Fran Alonso has bolstered his side with seven summer signings as they look to build on last season’s cup double.

Meanwhile, Spartans retained nearly every squad member and added new faces through Robinson, Bates, Jordan, McCafferty and Jameison. The team has also been boosted through academy graduates Henderson, McFayden and Sidey joining up with the SWPL squad.

Spartans were backed by an incredible home support in their 2-1 over Hearts with over 150 in attendance at Ainslie Park. Be there to cheer the team on at the Excelsior Stadium this Sunday (21 August) for the 12pm kick-off in more SWPL action.

Hear Hannah Robinson’s thoughts ahead of the game: https://bit.ly/SPRecast