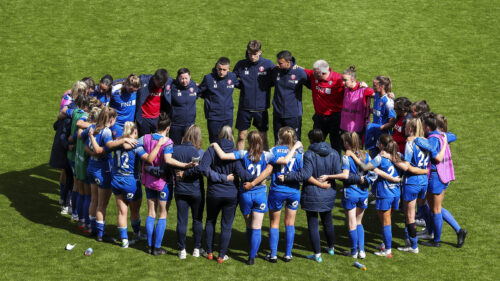 This Sunday sees Debbi McCulloch’s Spartans side welcome Partick Thistle to Ainslie Park in SWPL action for the first time this season.

When the two sides met last season, nothing could separate them. The teams drew 0-0 on two occasions and competed in a 2-2 draw at Petershill Park played out in hectic weather conditions at the Glasgow sides home park.

Brian Graham’s teams first two games this season ended in defeat, losing out to both Hearts and Celtic. They picked up their first point of the season last weekend, battling out a draw on the road in Aberdeen. Partick scored two goals in their outing up north, Cheryl McCulloch getting their first and Taylor Fischer adding a second from the penalty spot.

Spartans have picked up one win from the first three rounds of fixtures, the three points coming courtesy of a win over local rivals Hearts in match day two. Becky Galbraith scoring for the Edinburgh side that day.

Spartans were backed by an incredible Ainslie Park support throughout the 21/22 season, which continued into the first home game of the season. You can get behind the team again by purchasing your tickets via Fanbase app, pay at the gate through cash or card payment is also accepted (kick-off 1pm).