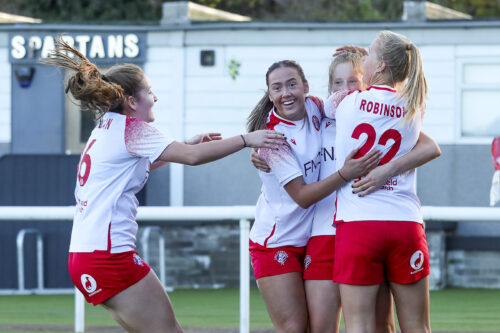 This Sunday sees Spartans travel to Balmoral Stadium to take on Aberdeen in week 12 of SWPL action so far this season.

Spartans and Aberdeen met three times last year in league action, drawing on two occasions, Spartans winning the third 3-2 after a comeback in Aberdeen seen the Edinburgh side take the three points home. When the two sides met this season, ten-player Spartans defeated Aberdeen 2-0, goals from Marshall and Galbraith sealing the three points.

Both sides come into the game on the back of a win. Aberdeen beat Dundee United 2-1 at Tannadice thanks to a last minute winner from Bayley Hutchison. Spartans defeated Glasgow Women 2-1 at Ainslie Park, goals coming courtesy of Becky Galbraith and Hannah Jordan, scoring her first goal for the club since signing in the summer.

Spartans currently sit 8th in the SWPL table after the first round of fixtures, five points above Sunday’s opponent who sit in 11th place. Aberdeen will start Sunday with a new interim management team, following the resignations of co-managers Gavin Beath and Emma Hunter.