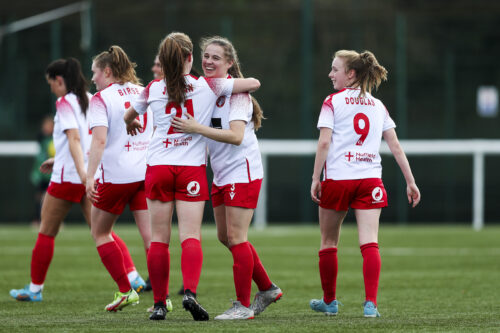 Spartans return from the international break with a trip to Dundee to face Dundee United at Gussie Park.

Spartans currently sit 7th in the table with Sunday’s opponents just two points behind in 10th place. When the sides last met, Spartans ran out 4-0 winners in a pre-season friendly at Gussie Park. The last competitive meeting was held at Ainslie Park in the SWPL Cup, Spartans winning 3-0 t0 progress to the Semi-Finals.

Dundee United have a few new faces since the sides last met competitively. Clare Delworth joined from Hearts in the summer and ex-Spartan Lisa Ryan made the switch at the end of her contract with Debbi McCulloch’s side. Sunday’s hosts have two wins to their name so far in the SWPL season, beating both Glasgow Women and Hamilton.

Both sides come into the game searching for their third win of the season. Spartans are boosted by the return of Robyn McCafferty after the defender served a suspension in the teams Semi-Final v Rangers at Ainslie Park. Top scorers for Spartans this season so far Galbraith and Marshall will be looking to build on their tally, the pair linking up frequently for the Edinburgh side.

Kick off on Sunday is at 4pm and tickets are available through Dundee United here.

Hannah Jordan gave her thoughts ahead of the game which are available on our Recast channel.