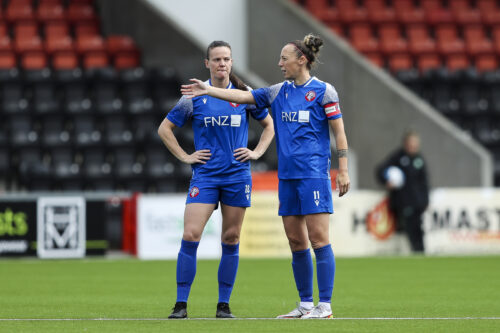 Spartans welcome Aberdeen to Ainslie Park in SWPL action for the first time this season.

The sides met a total of four times last season, three of which were in the SWPL with only the one game at Ainslie Park. The teams couldn’t be separated on two occasions and both taking a win a piece. The most recent league game ended 1-1, a Robyn McCafferty header from a set piece ensuring Spartans took a point back to Edinburgh.

The only SWPL win gave Spartans the three points at Balmoral Stadium, Debbi McCulloch’s side coming from 2-0 down to win 2-3. Alana Marshall causing the home sides all kinds of trouble on the left wing, providing three assists on the day after coming on as a substitute in the second half.

This season, Aberdeen have came away with just one point from their opening four games following a 2-2 draw with Partick Thistle. The side have boosted their squad with Dutch midfielder Nadine Hanssen and Finnish midfielder Elena Karkainnen. Emma Hunter and Gavin Beith’s side will take positives from their last game into this weekend’s fixture, with their squad putting in a strong performance against last season’s runners-up Glasgow City.

Spartans will also carry momentum into Sunday’s clash, the team still unbeaten at Ainslie Park this season with one win and one draw to the side’s name at home. Striker Becky Galbraith will be looking to add to her goal tally against the Aberdeen outfit, she scored three against the side last season.

The game on Sunday is a 1pm kick off at Ainslie Park, with U16s going free. The game will be streamed live via Recast for those unable to make the trip to Edinburgh.