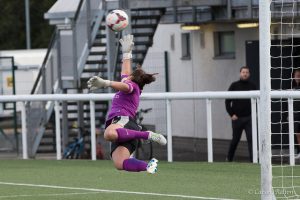 With Champions League spots up for grabs, Scott Booth’s starting XI was awash with Internationalists, whilst Spartans keeper Eartha Cumings was given the all-clear to play after she was one of several Under 19s to fall foul of a sickness bug that curtailed activity in Serbia earlier in the week.

When Louise Mason’s 10th minute pass behind the City defence found Sarah Clelland in space, Spartans looked to have carved open an early opportunity.  Sadly, the stand-side Linesman had other ideas and up popped his flag to deny the former City player the chance to net against her old team for the second game in a row.

The deadlock however was broken in the 17th minute.  Haley Rosen collecting the ball outside the box before delivering a shot that curled beyond the reach of Cumings to nestle in the back of the net.

After the SWNT success in Iceland during the week that created Scottish football history, National Coach Anna Signeul was on hand to watch Cumings pull off a wondersave to thwart Hayley Lauder from doubling the lead.  The Spartans stopper at full stretch to tip the shot over the bar.

Another product of the Spartans player pathway Ronaigh Douglas continued to ask questions in midfield, forcing Keeva Keenan into an unhelpful challenge that earned her a yellow card.

Early into the second half and it was Keenan once again involved with Douglas as the young Spartan was unceremoniously bundled into touch after chasing a charge down in front of the stand.  Referee Clark and her Assistant deeming the challenge to not have been one of foul play.

It was to be the end of the talented playmaker’s game as the groggy teenager was helped to the comfort of the changing rooms pending further assessment.

City pressed in the ever changing conditions with sunglasses, coat, brolly and shades required by supporters in equal measure.

The woodwork came to Cumings rescue twice as the game progressed however it was City who ran out winners by the narrowest of margins to take the three points.

You can watch highlights from the game here courtesy of our visitors.